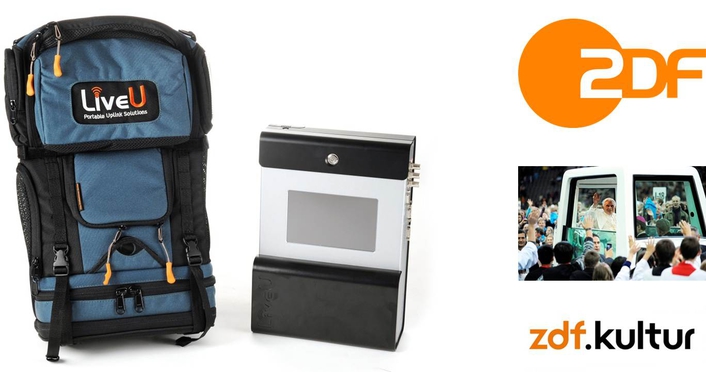 ZDF (Zweites Deutsches Fernsehen) is Germany's national public television broadcaster operating as an independent non-profit organisation. The broadcaster’s Berlin operation has been using LiveU for a range of news operations, including last year’s Pope’s visit where LU60 units were used to transmit live from the Olympic Stadium. The LU60’s store-and-forward technology was also used on this occasion.

On a day-to-day basis, ZDF deploys the LiveU system to enable live coverage of events for which OB vans simply aren’t suitable. Martin Uhlman, Production Engineer with ZDF Berlin, said, “The LU60 backpack technology allows us to increase the reach of our live transmissions as we can cover events that we can’t get to quickly with OB vans. Our ENG teams are also able to transmit as soon as they get to the site. LiveU has consistently provided us with good results, in terms of reliability and usability.”

ZDF has also tested the technology for use on its digital thematic channel ZDF Kultur with good results. For this project the broadcaster has been testing the LU60 system via LAN/DSL so that it can transmit SDI signals for use on the culture channel.

Zion Eilam, LiveU’s Key Accounts Manager based in Germany, said, “This is another key example of a leading European media company deploying LiveU’s technology to enhance its news operations. We are pleased that a company of ZDF’s stature has recognised the benefits to its viewers, providing fast and reliable access to events. Our local distributor, Netorium GmbH., has played an all-important role on the ground, providing service and support for ZDF’s activities throughout Germany”.

About ZDF
ZDF (Zweites Deutsches Fernsehen) is Germany's national public television broadcaster. It is an independent non-profit corporation operating under the authority of the Länder, the sixteen states making up the Federal Republic of Germany. Based in Mainz, ZDF operates a unique network of bureaus in all of the Länder capitals, and has major editorial and production capacity in Berlin.