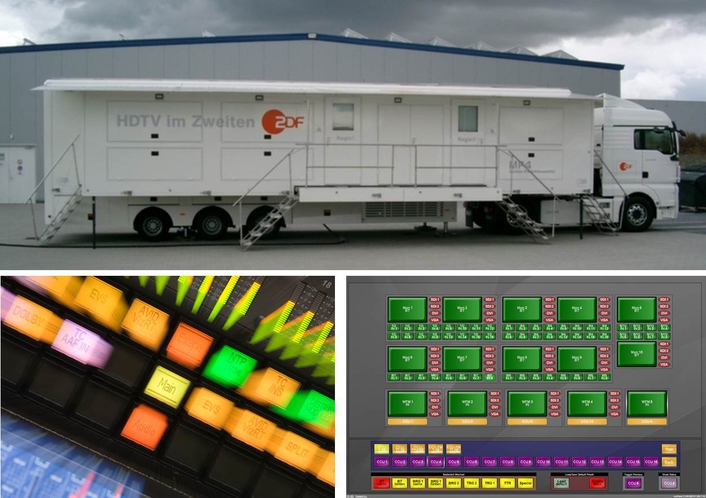 Third HD OB Truck with L-S-B's Virtual Studio Manager at ZDF in Mainz
Germany's ZDF television channel is using the VSM control system manufactured by L-S-B Broadcast Technologies GmbH in the new Mobile Production facility MP-6. In collaboration with the Mainz-based system integrator BFE Studio and Media Systems, L-S-B project engineers commissioned the OB truck at the end of January in Lerchenberg. The Virtual Studio Manager (VSM) takes over the control, management and supervision of the video, audio, KVM, remote and timecode routers in the OB truck. The transfer of signal names to multiviewers, monitors, video and audio consoles in the MP-6 is also carried out by the higher-level control system.

The VSM control system runs on two HP servers and is therefore assembled redundantly. This means all operations run parallel on two servers that synchronise one another mutually as a server cluster. In case of a server failure, the second server automatically takes over all functions smoothly. Apart from the high level of availability, the advantages of this redundant system layout are: maintenance work on the servers and software updates can be carried out without the need to shut the system down. The VSM control system can be configured easily and quickly, so that the OB truck can be prepared for productions in a short period of time. The VSM's flexibility enables operational staff to react to new requirements at short notice.

Altogether, the functionalities of the MP-6 are oriented towards the MP-4 and MP-5 OB trucks that are already in operation. However, the third truck, which was realised with the system integrator BFE, is smaller than the two predecessor models. A medium-sized VSM control system is used. This means that with the Virtual Studio Manager up to 3,072 signal paths can be controlled, managed and supervised centrally at a freely configurable user interface. The Nvision 8500 central video router, the Nvision CR3232 broadcast router and the Lawo mc²66 mixing console are connected directly via TCP/IP connections, whereby the VSM provides crosspoint control. Tally control and label transfer are available at the Snell Kahuna video mixer via the SWP08 protocol. In addition, Miranda multiviewers (Kaleido Densité and Kaleido X) with UMD and tally control are connected serially via so-called CommServers. The central components of the MP-6 that are controlled by the VSM include the Snell Freeway router and the Nevion SL D32 router, where the VSM provides crosspoint control as well.

The higher-level control system from L-S-B is also responsible for the joystick override control for the video section, CSU monitoring, mixer backup, and display and GPI control. Numerous VSM features such as Pseudo Devices and Storage Groups provide functions such as audio-follow-video and storing and loading production setups. In autumn 2010 L-S-B supplied 28 button panels, GPI/O boxes and UMDs together with the VSM software to the system integrator in Mainz. In addition, freely configurable vsmPanel control panels on monitors and touch-screens are available. The operating staff will trained by L-S-B engineers in March and April at the Lerchenberg site.

L-S-B Broadcast Technologies GmbH is the global leader in advanced mobile audio and video broadcast controls. The core product of the company, which is based in Bingen in Germany, is the Virtual Studio Manager (VSM), an IP-based overall control system. Since the VSM is able to control broadcast devices from any manufacturer, it provides a flexible and powerful one-stop solution that meets all broadcasting requirements. Together with the configuration software vsmStudio, the VSM makes a variety of hardware and software front-ends available for an unlimited number of users. This enables complete studios, master control rooms and mobile trucks to be equipped and managed with one single system.
Customers of L-S-B include the NDR, proSieben Sat. 1, Deutsche Telekom, T-Systems, N24, n-tv, and numerous other radio and TV stations all over the world. Founded in 2003, the mid-sized company has access to an ideally positioned global sales network. A staff of 20 people responsible for management, implementing projects, service, training, software and hardware development and production are employed at the company’s headquarters in Bingen in the German state of Rhineland-Palatinate. Additional training rooms and the company administration are situated at the new Training Centre in Wiesbaden.