In December 2012 ZDF upgraded two of its HD OBVans with a 3 speaker / room correction system from Trinnov.
In order to further optimize the sound reproduction in three mobile control rooms, the HD OBVans MP4 and MP5 of ZDF were equipped with Trinnov Optimizer systems during November / December 2012.

Each control room had been equipped with a Trinnov processor which was configured with the software modules "Optimizer" and "Smart Meter".

The “Optimizer” module provides an extensive correction using FIR filters and adjustment tools, which help to optimize the level and the phase/amplitude response of each speaker in the room. Also early reflections were minimized.

The sound control room 1 is equipped with a 5.1 monitoring system with three K&H O300 speakers in the front and a pair of K&H O110 for the surround channels. Via a 8-channel Trinnov Optimizer processor the speakers were perfectly matched to the workplace. Measuring at the listening position and other points in a radius around the listening position (multi-point measurement) has ensured that the listening area and the range of motion of the sound engineer are perfect. 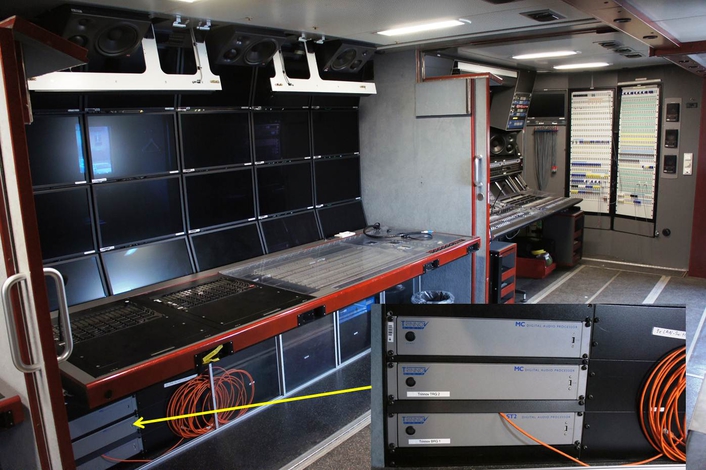 The multifunctional vision / sound control 2 in the center of the vehicle can be used either as pure vision control, as a pure audio control or as a vision / sound control. It consists of two work spaces which are positioned back to back in the middle of the vehicle. Each work place is equipped with L, R, C speakers. If one of the work spaces is in 5.1 surround operation, the left and right speakers of the other work space will be used for the playback of the surround signals. The Optimizer allows to store independent presets for each operation. In this case, three presets have been stored: 5.1 for work place 1, 5.1 and 2x stereo for work place 2. All operating presets are available at your fingertips via GPIO.

The stereo monitoring system of vision control room 1 has been optimized with a stereo Optimizer according to the multi-point method.