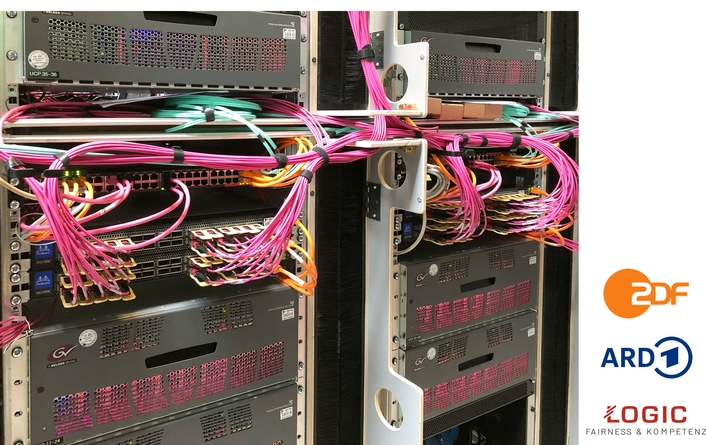 Having already successfully assisted clients in converting large studio and production buildings to an IP infrastructure, LOGIC media solutions was in charge of another IP migration process in the broadcast industry that is currently receiving particular attention. However, this time, it is a mobile and flexible flight case infrastructure for the “Mobile Produktions Einheit” (MPE) (Mobile Production Unit). The technology used jointly by German broadcasters ZDF and ARD has been upgraded to full IP functionality in essential core components. The mobile production unit comprises a wide variety of customised components to suit the individual purpose and event. It is used jointly by ZDF and ARD for events which, due to their size and complexity, cannot be handled with conventional production means (OB vans, on-site studio), e.g. European and World Cup football matches or summer and winter Olympic Games.

To react to new challenges with a maximum of flexibility, the customer decided to convert the MPE to a completely IP-based infrastructure with five newly designed flight case racks at its core as part of the reinvestment of central components. The system offers the greatest possible flexibility and scalability, making unexpected expansions and the temporary integration of additional rental equipment possible. In the case of the EURO and the 2021 Summer Olympics, for example, the use of additional EVS servers. The system is currently in use at the EURO 2020, providing the production infrastructure at the National Broadcast Centre (NBC) in Mainz after receiving signals from the International Broadcast Centre (IBC) located near Amsterdam.

The MPE racks are equipped with different components, depending on the application. During the configuration for the European Championship 2020, LOGIC implemented components from its partners and third-party devices. The motto was to put together the best products in each case. The IP-based infrastructure ensures that the various components work seamlessly with each other, that the interfaces to the hardware are designed flexibly, that conversion and signal transport function flawlessly and that the system can grow flexibly at any time. The MPE racks operate based on SMPTE 2110, SMPTE 2022-7 redundant, including NMOS (IS-04/IS-05). They are PTP-compliant and can handle 1500 video connections and up to 5000 audio connections in their entirety.

The technology in detail: LOGIC implemented Grass Valley IQUCP systems as gateways and Grass Valley MV821 multiviewers in the racks. Other third-party devices, which are already SMPTE 2110 compliant, were also used as gateways, multiviewers and processing devices (e.g. 1080i<->1080p converters). Nevion Virtuoso devices serve as gateways and for advanced monitoring of incoming and outgoing lines. The audio matrix is also realised with two additional Nevion Virtuoso units, which allow 2048x2048 MADI connections. The switches installed in the system are also ready for all eventualities. 10 Mellanox SN3700c and two eMerge switches deliver a throughput of up to 12.8 TBit/s. The MPE units can handle approximately 800 SDI to IP and 800 IP to SDI signals. A higher-level broadcast controller controls the whole system. Interestingly, Nevion's VideoIPath is used as an SDN orchestration layer, providing a control layer for the broadcast controller between the end devices and the network. 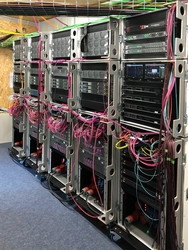 ZDF and ARD are getting their signals from the IBC near Amsterdam without having a large production team on site for the current European Football Championship. The signals go in parallel from Amsterdam to Mainz to the NBC and Cologne to the ARD sports campus. The Amsterdam, Mainz and Cologne sites are connected with a 10 Gbit/s fibre ring line. The MPE racks are set up on the Lerchenberg in Mainz, ZDF’s headquarters. They provide the SMPTE 2110 production infrastructure for both the 2020 European Championships and the 2021 Summer Olympic and Paralympic Games, produced jointly with NDR at the NBC in Mainz.

LOGIC is a German system architect for professional moving picture solutions. After more than 20 years in the market, LOGIC is one of the leading resellers and designers of complex and sophisticated media landscapes. With a dedicated team, LOGIC also leads the migration of professional media production to the cloud.

LOGIC is a Europe-wide certified Amazon Web Services (AWS) reseller and consultant. In Germany, the company is also certified by AWS for the Public Sector and is thus responsible for public broadcasting, among other things. LOGIC works with a number of well-known and innovative manufacturers and offers solutions for live production, file-based productions and customer-specific workflows around moving pictures solutions. In the course of the migration to IP-based production, LOGIC is taking a pioneering role and is implementing the design and infrastructure together with its partners.

Since 2018, LOGIC has been developing its own framework called PORTAL, which enables media professionals to master the migration to the cloud. Using agility and the required technology, PORTAL simplifies highly complex workflows, making them more accessible and faster to implement.