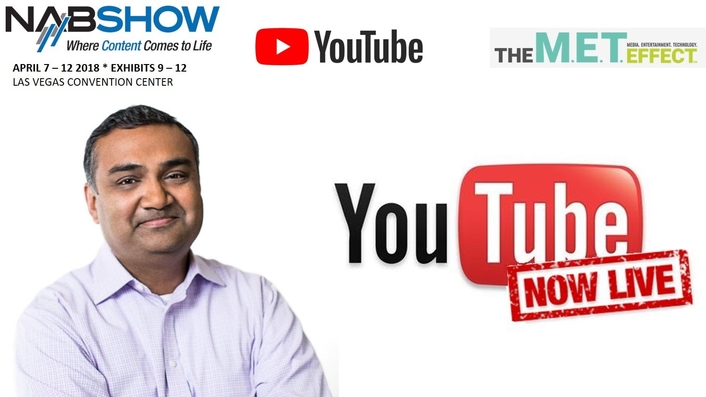 Neal Mohan, chief product officer for YouTube, will headline the 2018 NAB Show Opening on Monday, April 9 at 9:00 a.m. in the North Hall of the Las Vegas Convention Center. Mohan will discuss the future of TV and entertainment and how the intersection of content, hardware and software is allowing media companies to reach more audiences in new ways.

The opening event will also feature NAB President and CEO Gordon Smith’s “State of the Broadcast Industry” address and the presentation of the NAB Distinguished Service Award to “Good Morning America” co-host Robin Roberts. The event is sponsored by Blackmagic Design.

Mohan is responsible for YouTube products and user experience on all platforms and devices globally, including the company’s core mobile applications, technologies like Live and VR, subscription services YouTube Red and YouTube TV, and vertical experiences such as YouTube Kids, Music and Gaming. Products for media partners, content creators and musicians are also part of his portfolio.

“We are thrilled to have Neal Mohan keynoting this year’s show. YouTube’s story is a perfect representation of the ‘M.E.T. Effect’- the convergence of media, entertainment and technology,” said NAB Executive Vice President of Conventions and Business Operations Chris Brown.

Prior to his current role, Mohan served as senior vice president of display and video ads at Google. He headed advertising efforts on YouTube, the Google Display Network, AdSense, AdMob, and the DoubleClick family of programmatic ad platform products. Additionally, he helped elevate the overall digital media industry by building innovative solutions for millions of Google's advertising and media partners around the world.

At NAB Show, Google will showcase its media solutions via demonstrations at booth SU218 and will participate in more than 30 talks during the course of the show, both in conference sessions and presentations at the Google booth.

About NAB Show
NAB Show, held April 7-12, 2018 in Las Vegas, is the world's largest convention encompassing The M.E.T. Effect, the convergence of media, entertainment and technology. With 103,000 attendees from 161 countries and 1,800+ exhibitors, NAB Show is the ultimate marketplace for solutions that transcend traditional broadcasting and embrace content delivery to new screens in new ways. From creation to consumption, across multiple platforms and countless nationalities, NAB Show is where global visionaries convene to bring content to life in new and exciting ways.