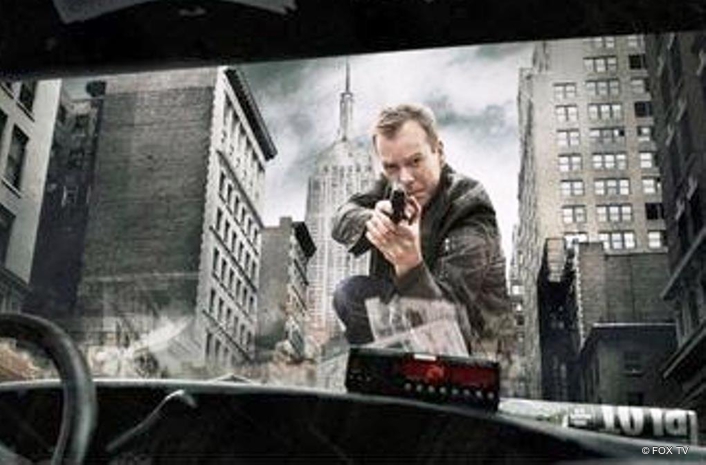 “I'm federal agent Jack Bauer, and today is the longest day of my life.” – Jack Bauer, 24, Fox TV, 2001-10
I recently watched a couple of the old segments of 24 on YouTube with my iPad and they delivered the same palm-sweating suspense as when they first ran.
It made me wonder how much more Jack could have crammed into his 24 hours if he had today’s tablets and smartphones instead of that old-fashioned Blackberry.
We don’t use our tablet for entertainment (or games) often because ours is for business … really!

And when attending a meeting or conference, sitting in the airport waiting area or stopping by the local coffee shop, it’s easy to see we’re not alone.
O.K., some of the folks may be playing games on their tablets, but let’s give them the benefit of the doubt.
While our kids still think the tablet was invented by Apple, Microsoft had developed a family of units years ago; but they didn’t have the user- friendly interface, superior power conservation, natural feel and sleek lines of the iPad.

Bill Tried – Way back when Bill Gates was still president of Microsoft, the company took a run at getting the market interested in tablet computers. True, they weren’t as sleek, sexy as the iPad that was introduced later but what the heck. And after more attempts at the market than we can count, the Surface seems to finally be getting some market traction.

With the overwhelming success of today’s tablets, they’ve gone from being a personal video, gaming, social media device to a serious business tool.
Jack understood what was going on and said, “I know you think you're doing the right thing.”
Gartner estimated that more than 80 million units were sold last year, a 200 percent increase over the previous year; and by the end of 2013, they will outsell PCs. 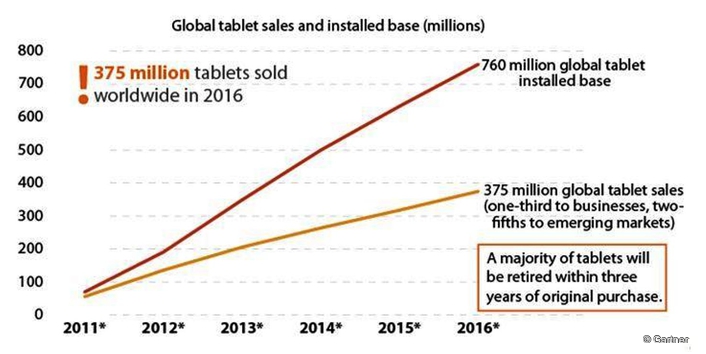 First the Boss, then You – When the boss got his or her first tablet to take to meetings and show off around the company, it didn’t take long before everyone felt it was O.K. to bring their own devices to work. BYOD (bring your own device) is now almost universal in every organization.

By 2016, it is estimated that 760 million units will be in use and more than one-third of them will be used for business.
The smartphone (iPhone) started the trend with senior executives wanting the compact device to do almost everything. It didn’t take long for them to discover that the tablet was even more useful--and a lot easier to carry around for email, presentations and other business applications.
People in the field have found the tablet easier to use and more effective for client-interfacing activities and marketing folks like them for their program/planning work.
Doctors and nurses use them to reduce errors and speed patient care.

Operations/production people use them on the manufacturing floor. And almost anywhere you used to see someone carrying a clipboard or ream of paper, you’ll now see them with tablets tucked under their arms.
Watching folks worry about everyone else’s work, Jack said, “You should mind your own business.”
Only a few years ago, senior management was prying open the door for the use of personal mobile devices at the office. Today, almost every business has a BYOD (bring your own device) program and policy in place. 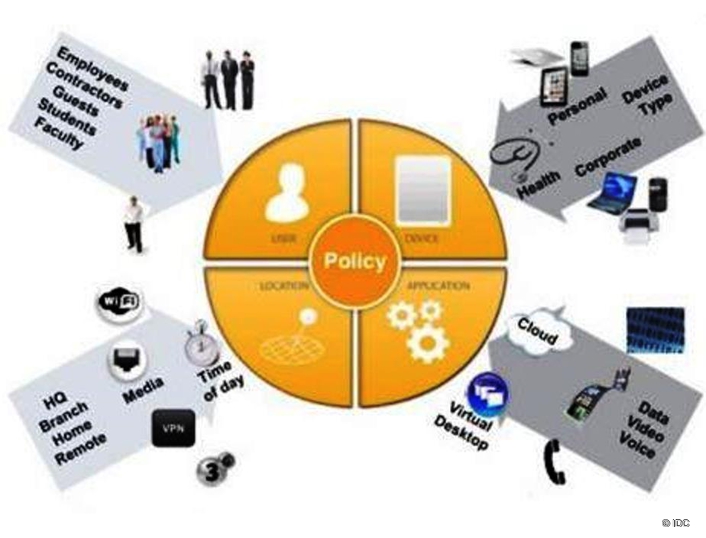 Control Chaos – Once people began bringing (and using) their own devices, the IT department had to face a whole new operations/control dilemma. In the end, they found it was easier to control and protect the company data than it was the devices. Disabling lost/stolen devices may seem extreme but too many unsecured devices have left vital company data vulnerable to “others.”

Rather than attempting to impose a rigid set of rules for employee-owned devices (which they know aren’t enforceable), IT and business unit managers have focused on protecting corporate data with containers, robust business app wrapping and personal-to-corporate segregation.
New technologies enable them to quarantine infected devices and disable device access to company data if the device is lost or stolen.
To keep pace with the on-the-go professionals, IT departments and software/service providers have developed business apps for a wide range of specialized and general business uses.
Business applications have moved beyond the first wave of personal productivity tools to manageable, secure enterprise applications that support major business initiatives.

Biz Apps – The first business application most people use their tablet for is email. It’s a great way to handle correspondence on-the-go and a whole lot easier to read than your smartphone screen. In addition, developers have introduced an almost unlimited array of personal business apps and increasingly software/service providers have incorporated tablet apps into their offerings. 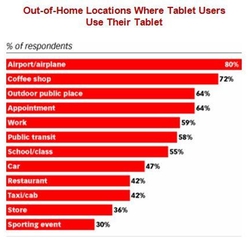 While many like to claim the tablet will replace the PC (they said that about the smartphone also), people still generally prefer to use the computer in their office.
Often, when they are mobile, they’ll use the tablet and have the smartphone with them … just in case.
As Jack observed, “There are things in this world which are out of our control.”
Tablets have found their place in the business person’s life because:
-        They consume much less power, even when you’re using a Macbook Air or ultrabook with SSD.
-        Virus attacks are probably a lot less. Just keep in mind that this is the year that hackers, bad blackhatters and cyberthieves are turning their attention to mobile devices, so they’re all fair game now.
-        True, a 4-lb computer is a lot lighter than the sub-10 lb. notebooks, but weight is weight.
-        A good tablet is less expensive than a mid-range laptop, extra battery (just in case) and software. You’re using the device for business but you’re paying for it.
-        While telcos like to encourage you to get the tablet with 4G/Wi-Fi, the truth is most tablet users tap into widely available and free/low-cost wireless service.
-        There are inexpensive apps for real business use.
-        They offer a user-friendly interface – iOS, Android and even Windows are extremely user friendly interfaces that don’t suffer from our 20 plus years of PC legacy.
-        SSD-based ultrabooks and tablets are very close to instant-on business systems (the tablet is still faster).
-        Social media has become an integral part of today’s business and there are social networking tools that make it easy to contact/work with co-workers, family and yes friends. Social media is becoming an efficient, effective networking/marketing tool.
Today, the tablet empowers workers to be more productive … no matter where he or she is.
Watching Jack, Chloe commented, “Don't worry... he's really good at this.”

Anywhere, Everywhere – Much lighter to carry and use on-the-go, the tablet is finding widespread business use and managers are finding people are more productive with their light, easy-to-use mobile devices. 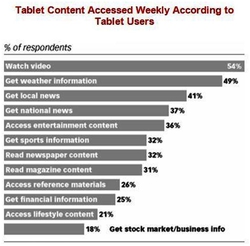 Obviously, the tablet’s mobility makes your boss happy because you can literally take your work with you and work anywhere/anytime.
In fact, Gartner found that 68 percent of tablet users take work home on their mobile device, compared to 43 percent of the PC-only users.
While we’re still extremely cautious about how we use the cloud sharing/storage services, they do make it easy to move content/data from one device to another – desktop, ultrabook, smartphone.
Even though it’s hard to convince people back in the office that travel isn’t all fun and games, tablet users will still take a break to watch a video and even play a mindless game – or two – but they also use their devices to keep up with everything around them as well.

Seriously Folks – It’s true that you often see people watching videos and playing games on their tablets on long (or short) flights, but the devices also give people to catch up on international, national and business news. If they can connect to the Internet, they can even keep track of how their portfolio and/or retirement fund is doing.

Overall the Android OS-based devices are having a higher adoption rate but that isn’t a really true picture because each of the offerings – Samsung Tab, Amazon Nook and the myriad of trailing offerings – each have their version of the OS so…
Apple’s iPad continues to hold a major lead over everyone else’s offering but Microsoft’s Surface is becoming a very strong – and serious – contender in the marketplace.
While the tablet is supposed to streamline the devices I have to carry, I still find myself packing up my ultrabook (for work in the hotel room in the evening), tablet (for email/presentations during the day), smartphone (for the gotta-talk-to-you calls, texting).
As IDC’s Bob O’Donnell recently pointed out, the only problem is that our devices enable/encourage us to be on 24x7 and they are easily monitored. 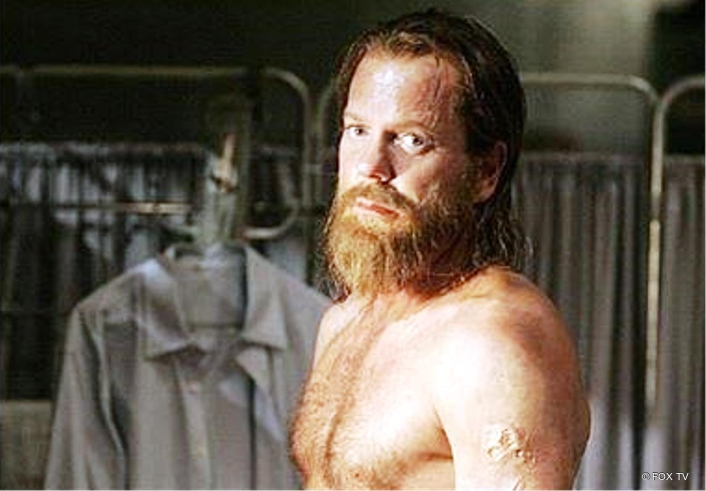 The End of an Era, The End of New Devices
Our Content is Overwhelmi...s, Needs to Be Controlled
Machines, Things, Big Data, Quants - Next Stop…