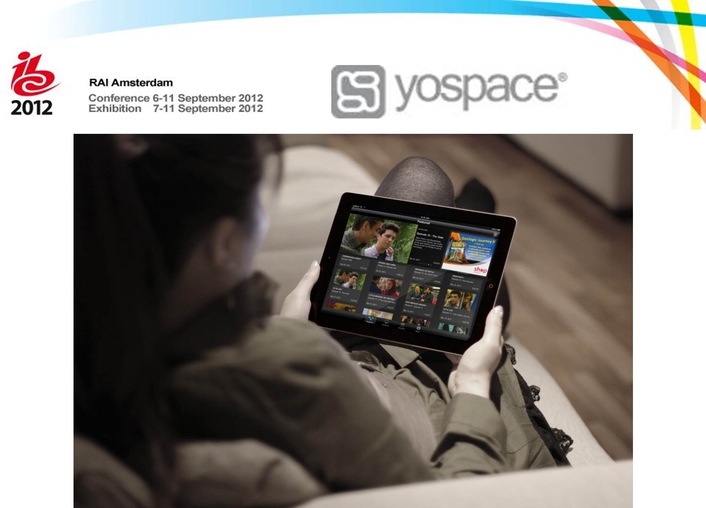 Find Yospace on stand 14.342, close to the Connected World in the new hall 14
Yospace, the content distribution innovator, is using IBC to focus on its unique system to tailor individual content without disturbing the stream. Its technology – which has been shortlisted for an IBC 2012 Innovation Award – replaces content and advertising in real time at the headend, meaning that it is delivered as a single stream without buffering, freezes or lost video. The power of the system is that every single stream can be personalised for a specific viewer.

The unique Yospace approach is based on two key technologies. First, it interfaces closely with the broadcaster’s own playout automation system so it can switch to alternate content with frame accuracy. That means the viewer is never aware that there has even been a substitution.

Second, because the content replacement and streaming distribution are offered as a cloud service, the system can scale to any number of simultaneous viewers and complexity of content replacement. Given sufficient granularity in the subscriber management system, a unique and tailored commercial break can be tailored for each individual viewer. Taken together, the Yospace innovations mean that broadcasters can now support the delivery of linear programming to alternative platforms with a powerful commercial proposition.

“Everyone agrees that multi-screening and delivery to mobiles, tablets and computers is one of the top issues to be debated at IBC this year,” said Tim Sewell, CEO of Yospace.

“Our unique technology is already exciting the broadcasters who are trialling it, and the whole team is looking forward to discussing detailed implementations with broadcasters from around the world at IBC this September.”