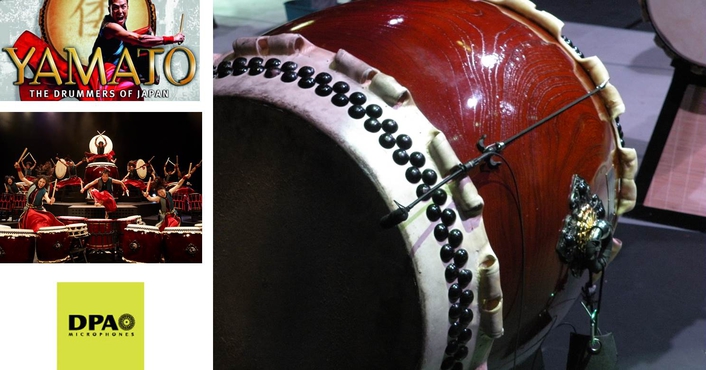 "We have been using DPA mics on stage for a few years now," explains Erik Bouwmeester, Sound Adventure's owner and Yamato's FOH engineer. "We use the d:fine 4066 Headset Microphones for vocals or flutes and the d:screet™ 4060 Omnidirectional Miniature Microphones for string instruments such as the guitar-like Japanese Samisen."

Yamato have become something of a cultural phenomenon in recent years. Founded in Japan’s Nara Prefecture in 1993, they have given more than 2,500 performances in 51 different countries and regions of their spectacularly choreographed taiko drumming. The troupe tours for between six to ten months a year, creating and presenting original compositions on an impressively global scale.

This level of touring means that all equipment has to be very hard wearing to survive the demands of life on the road. Added to this, Yamato's artistic director Masa Ogawa insists that the audience must not see any microphone during the show. Happily, the new d:vote 4099 clip mics used by Sound Adventure are discreet enough to ensure that remains the case.

Bouwmeester uses 32 wireless channels, 14 of which are miked with DPA mics

"They are a perfect match with our beltpacks and can easily handle the SPL of the drums, which is sometimes more than 132dB," he says. "Also the variation of good clips and clamps is very useful. For example we use four guitar clamps with an elastic extension on the medium drums called the Myadaiko. We also use a single d:vote 4099 on the biggest drum Yamato plays, the Odaiko which weighs almost 500kg, but it has no problems in picking up that sound as well."

In total Bouwmeester uses 32 wireless channels, 14 of which are miked with DPA mics. These are fed through a d&b audiotechnik PA system via a Digidesign venue profile/mixrack Front of House console.

Having successfully used the DPA d:vote 4099 Instrument Microphones in Europe, Bouwmeester says the Yamato troupe is now considering buying another DPA Rock Kit package for their own shows in Japan. They are currently back in their home country for various performances but will be returning to Europe in June for shows in Germany and Eastern Europe.

"Obviously I will be using my DPA Rock Touring kit for those shows as well," Bouwmeester says.