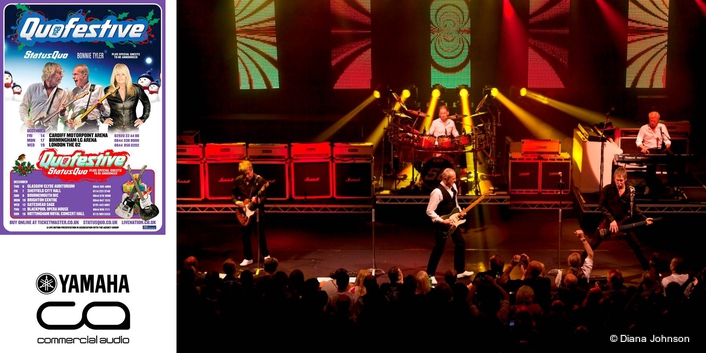 .
Almost as much a part of the festive season as tinsel and Christmas trees, the annual December UK tour by evergreen rockers Status Quo has this year been wryly dubbed Quofestive. With one of the very first PM5Ds still doing faultless service at front of house - and three M7CLs - the tour is enjoying a major Yamaha presence.

After nearly 50 years in the business, Quo is a band that likes things to be consistent and reliable. Front of house engineer Andy May has been with them for a decade and is the contented owner of one of the first PM5Ds to come off the Yamaha production line.

“I started working with the band in 2002, using an analogue Yamaha PM4000 and outboard,” he says. “My introduction to digital consoles was with a PM1D at a Lionel Richie show in Monte Carlo. I found it straightforward to learn and the gig went very well, which is what started to turn my mind towards digital.”

Using a DM2000 to mix a few low-key Quo gigs convinced Andy that Yamaha digital consoles were the way forward. A tip off that the PM5D was in development led to him ordering one before it was even launched. “At the time people said I was mad,” he laughs. “It was a bit of a blind leap of faith, but one which worked out really, really well.

“I’ve done over 800 Quo shows with it and it has been exceptionally reliable - the only problem I’ve ever had was during a load in where it was left outside for a while in its case. Rain got in, so we had to take the desk apart and dry it out with hairdryers. But it did the gig fine and has worked faultlessly ever since.”

Andy allocates the tour’s 44 inputs to two layers, one for drums and keyboards and everything else on the second. “I don’t tend to fiddle too much with the drums and keys, so I have everything that I do need to work with on the second layer, meaning I’m not having to go backwards and forwards,” he says. “I don’t use scenes because it’s easier just to turn channels on and off on the top layer manually - for example the vocal mics or when Andy Bown plays guitar in a few songs.”

Andy May and Tim Franklin

Probably knowing the PM5D better than any other touring engineer, Andy is quick to illustrate how to get the best from it.

“Much like the PM4000, the PM5D is a great sounding console if you don’t abuse the head amps or outputs. Providing you keep it at -12dB gain, it’s absolutely fine,” he says. “There’s so much power in a modern PA system that you don’t need to be peaking the inputs to get volume. In fact I’m always telling them to turn the system’s gain down so I can actually work the console a bit.”

Monitor engineer Tim Franklin - who has been working with the band even longer than Andy - is manning a Yamaha M7CL-48, which this tour joins a further pair of M7CLs for the support acts (supplied, along with the PA, by Capital Sound). Tim switched to the M7CL four years ago, the fact that every channel has its own fader being a significant advantage.

“When I went over to digital, I chose Yamaha firstly because Andy didn’t have a bad word to say about them and, secondly, because the operating system is very intuitive,” he says. “The advantage of the M7CL is that I do cues for the band all the time and need to see all the inputs at once. If it was a layered desk, I literally wouldn’t have the time to switch between banks to access the channels I need to get to.”

Neither Andy nor Tim use any external effects, which in Tim’s case means the M7CL is working flat out. “It’s working overtime. I use a lot of onboard parametric EQ, but the quality of the console means that it’s good enough to cope with it. It’s not slowed down, it’s not sounding nasty, it’s great,” he says.

“All of the band use in-ears, except for one wedge which Rick (Parfitt) uses in conjunction with one IEM. There are also a couple of extra wedges for this tour, for use with guest vocalists. “I’m using all the outputs, so when we have a guest up I need to use two matrix outs. I’ve got the matrix card in the back with four outputs. It’s automatically assigned a parametric EQ, so I don’t even need to get any outboard for that,” Tim continues.

“A band like Quo knows exactly what they want to hear. Initially it was quite hard to convince them that they could continue to have the sound that they were used to with a digital desk, but it was seamless. Any fears anyone had were groundless.

“It’s been perfect. It paid for itself within a year and I intend to stick with it for as long as I can.”

It’s a sentiment shared by Andy, who says, “The PM5D has become a really good benchmark product in the rock business. There’s nothing it won’t do, it works reliably every day and you can always achieve what you need to without having to scratch your head too much. Mine has paid for itself several times over.“

“One of the great things about Yamaha is that they haven’t flooded the market with updates or new products every few months. There are thousands of PM5Ds and M7CLs working out there with very few reliability issues. What’s not to like?”