Yamaha CL5 Has It All Covered At The Royal Albert Hall 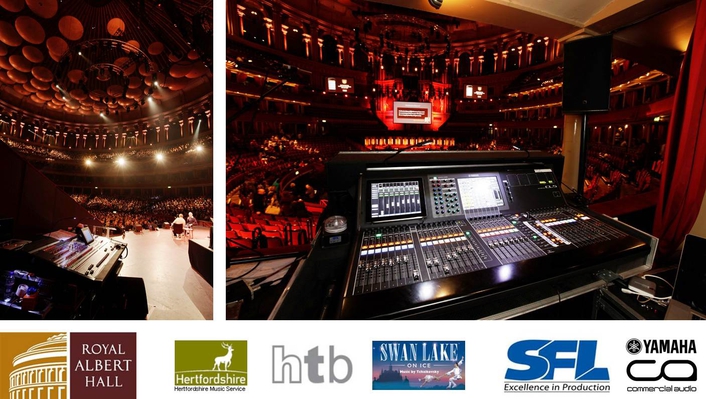 Education, Religion and Entertainment
Hot on the heels of Australian indie rockers Temper Trap being the first band to tour with a Yamaha CL5 digital mixing console on monitors, mid-May saw the first shows to use a CL5 at front of house. The three sold-out events at London’s Royal Albert Hall were all very different and Reading-based SFL Group found that the CL5 delivered everything expected of it - and more.

SFL is the Albert Hall’s AV partner and one of the first UK rental companies to invest in the CL series. The three back-to-back events - a schools choir concert, church leadership conference and ballet on ice - provided the ideal situation to give the company’s brand new CL5 a real test.

The first event was the annual Hertfordshire Music Service gala, which saw over 2500 children from schools all over Hertfordshire perform in two separate shows on the same day. The second - the following day - was the leadership conference for the Holy Trinity Church, Brompton (HTB), featuring a mix of contemporary worship music and motivational speaking.

“The music gala saw a junior orchestra and bands playing as well as choirs made up from schools across the county,” says SFL Group Managing and Technical Director Mark Payne, who was FOH engineer for the production.

“Teachers had been rehearsing ‘mini’ choirs (of 10-50 children) each separately then, when they got to the venue, all the choirs came together, had a quick rehearsal with the junior orchestra and sang as one. For the second show, different choirs sang with the same orchestra. They had an amazing degree of capability.”

The production needed around 60 channels, including around 25 microphones on the massed choirs, a number on the orchestra and some DIs for the bands which were the warm-up acts for the choral performance.

“On arrival at the Albert Hall, he plugged a Mac into the Dante split and soundchecked the band even before they arrived. It was his first show in the Albert Hall and being able to do a virtual soundcheck gave him a lot of confidence,” says Mark (Payne). “We were also able to do Dante splits to the PM5D / DSP5D monitor board. I like to run a system digital all the way to the amplifiers and it allowed us to have no analogue splits on what was a very complex show. It worked absolutely faultlessly and the sound quality was excellent.”

The third event was completely different again, three performances of Swan Lake on Ice featuring a 25 piece orchestra. “We had virtually zero soundcheck time because the ice rink takes time to put in and occupies 2/3 of the Albert Hall floor area,” says Mark. “We ended up rehearsing Act 1 of the orchestral piece down in the foyer bar, then Act 2 in the hall. The ability to move the console very quickly was extremely useful.”

Once the shows were over, Mark had a brief moment in which he was able to reflect on his first working experience with the CL series.

“What I require of a digital console is to get out of the way and let me do my job easily,” he says. “As a sound engineer I will generally place usability above perceived sound quality. But as well as being quick and easy to use under pressure, the CL5 also delivers fantastic sound quality, thanks to the state-of-the-art preamps in the RIO remote i/o units.

“There is a high degree of commonality between the interfaces of the CL series and the M7CL, meaning that CL consoles are very immediate to use for anyone with any Yamaha experience. The custom fader bank structure is very powerful and the included Neve compressors are a very useful transparent dynamic control for orchestral submixes. They made my life a lot easier.

“Space for the FOH position for all of these shows was also at a premium. Anything bigger than a CL5 or M7CL wasn’t going to fit, yet we were able to mix three very different and complex shows with no problems and have the full confidence that the system would be completely reliable. I think it’s a fantastic console.”