Yamaha CL5 Is Caught By The Temper Trap 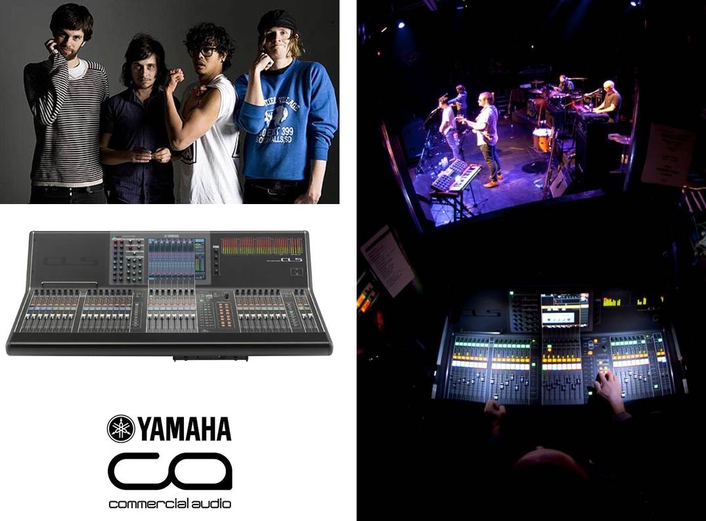 .
Australian indie rockers The Temper Trap are the first band to tour with one of Yamaha’s new CL series consoles. Heading straight off the production line and into rehearsals for the band’s world tour, the CL5 has made an indelibly positive impression on monitor engineer Gabriele Nicotra.

Having mixed FOH for Lostprophets, Ed Sheeran and The Feeling, as well as monitors for Glasvegas, Maximo Park, Biffy Clyro, The Specials, TV’s X Factor and many more, Gabriele has extensive experience of a wide range of consoles, both analogue and digital. The fact that he likes the CL5 so much speaks volumes about the new series.

“When the console was delivered it was the first time I had seen one, so I was effectively learning it in front of the band,” he says. “But learning is really too strong a word - the CL5 is by far the quickest desk to adapt to I have ever used.

“Yamaha made a very wise decision in keeping the user interface and layout very similar to the M7CL, which is a desk that everyone has used at some point. Compared to most new desks out there, the CL5 feels remarkably intuitive and straightforward.”

Further proof of this came on the UK dates, where house engineers were mixing monitors for the support acts.

“I supervised them for the first couple of shows, but it was obvious that they were finding it as straightforward as I was. So I just stuck my mobile number to the desk in case they needed me,” he continues. “My phone didn’t ring once and all the in-house engineers who have encountered it so far have loved it.”

Of course, a console can be great to use, but the most important factor is how it sounds. In this, Gabriele is equally unequivocal in his praise.

“I love the sound of the mic preamps and am particularly enjoying the Premium Rack dynamics and EQ's. They are amazingly natural-sounding,” he says. “The DSP also allows for a vast amount of graphic EQs and effects.”

All of the Temper Trap are using in-ear systems apart from bassist Jonathon Aherne, who uses a wedge. In total Gabriele is doing mixes for three stereo wireless in-ears, three hard wired sends, one wedge and two sidefills.

“I’m using the 1176 model very gently on the IEMs and also the Rupert Neve compressor very subtly on lead singer Dougy Mandagi’s mix. It’s so subtle that he doesn’t notice it, but it keeps the sound under control,” Gabriele continues.

He has used the CL5’s versatile customisation options to allocate a custom bank of 26 faders to all the main inputs that he needs to adjust during the show, as well as the Iinear master sends, effect returns, DCAs and control of the ambient mics.

“The total customisability of the surface, with the large number of user-defined fader layers, knobs and function keys is superb. The essential micro-displays to show channel name and selected parameters and the colour coding for the individual channels are key features for me,” he says.

“It’s a dynamic show, there’s a lot of light and shade and I have to mix the monitors differently, depending on the song. I’ve got pretty much each one saved as a scene and having the most-used controls grouped in custom banks is incredibly useful.”

He concludes, “I absolutely love the CL5. It sounds great, feels great and, given the choice of any digital console, I wouldn’t hesitate to choose it. I’ve been so impressed with it that I’ve enquired about buying one myself.”