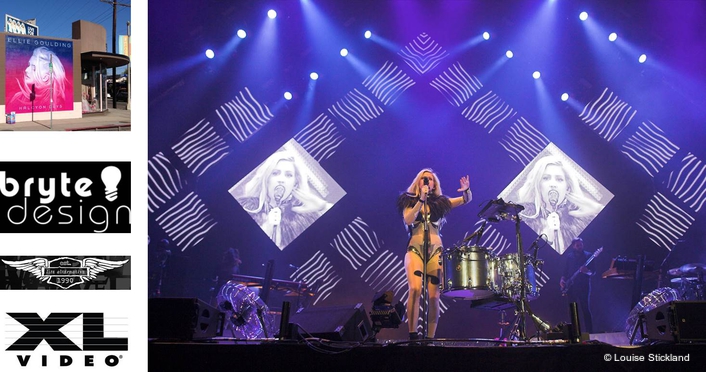 XL Video also supplied cameras, a Catalyst media server for playback and PPU and crew. The account is being Project Managed by XL’s Phil Mercer.

Carter, who operated lighting for this section of the tour, was the first person in the UK to tour the brand new Hybrid 18mm screen on Goulding’s UK theatre tour - part of the same ‘Halcyon Days’ album campaign - in October 2013. It features a standard medium 18 mm pitch comprising 32 x 32 pixels per panel, with 4 x 4 higher brightness (7700nit) low resolution pixels also embedded in the same panel, which gives fantastic twinkling and other magical effects.

The 196 tiles of LED for these arena shows were all fitted into XL Video’s touring frames and used to form 49 different diamond shaped video elements which were flown on five different planes across the stage for additional depth. 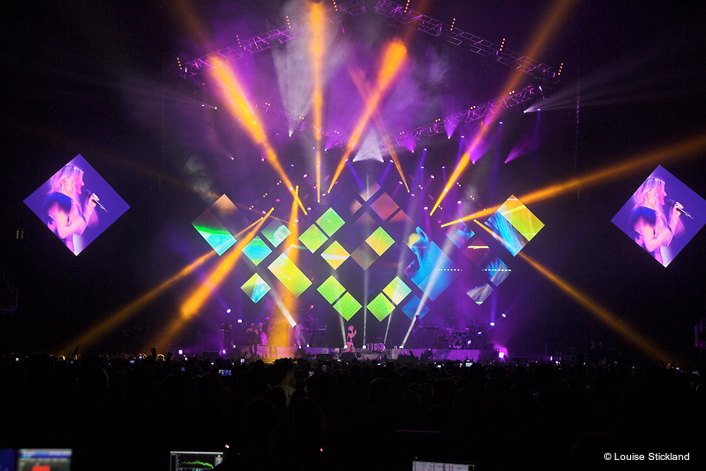 They created a completely unique look – fresh, different, exciting - which was up-scaled considerably from the theatre sized version of the show that was so well received on the first UK and European legs of the tour.

Six cameras of IMAG were added for the arenas – mixed by Robin Haddow – who worked closely with Carter to craft the beautifully fluid, dynamic visual environment that was the backdrop to Goulding’s high energy performance.

The centre LED diamond was made up from nine (3x3) touring frames of Radiant MC-18 Hybrid, and immediately surrounding that were an additional 22 one-touring frame size diamonds of the same product.

To the sides of that layer left and right were four frames containing the standard Radiant MC-18T, and then moving offstage again, were another four one-touring frame diamonds each made up from the Pixled F-12. 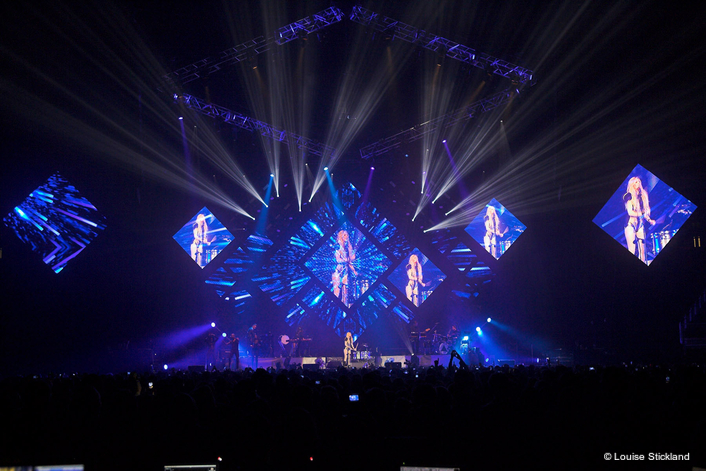 The impressive mosaic was completed with the left and right IMAG screens also flown in diamond orientation to keep the continuity. These featured the Radiant MC-7T screen to provide a higher definition surface for the camera images, arranged in a 3x3 touring frame format.

Detailed discussions and advanced planning by Carter, Haddow and LED Tech Iain Rendle beforehand resulted in an expedient rigging plan for the touring situation, and this paid off when they got to production rehearsals at LH2.

The complex build plus the fact that all the trusses suspending the various video frames were also used for rigging lights … resulted in some great teamwork between XL’s crew and the lighting crew from Lite Alternative. 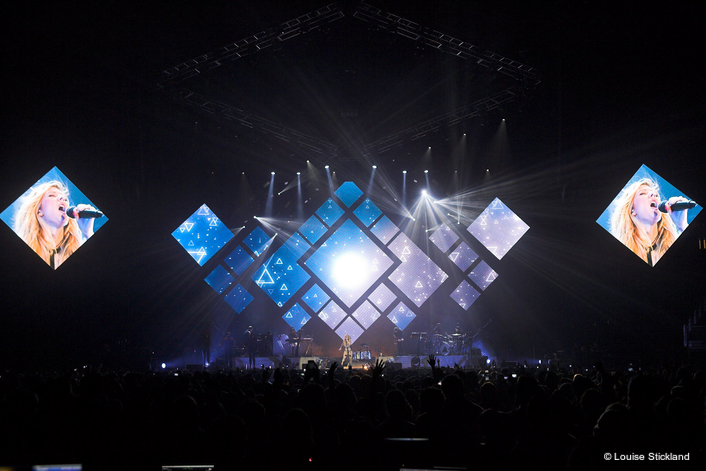 Using the Hybrid screen opened up a myriad of new and off-beat possibilities for Carter and Paul “Pablo” Beckett, her Bryte Design business partner who created all the video content. For the arena shows he re-edited and re-worked the material that they used on the theatre sections of the tour.

The 49 screen elements were all treated as one continuous surface and mapped perfectly using the Catalyst’s ‘Exact Mapping’ function, giving the opportunity of using infinite combinations of its different elements.

Carter’s vision for the show has always been a unified collage of lighting and video, a harmony that also embraced Haddow’s integration of the new IMAG with the existing playback visuals, adding a new dimension. 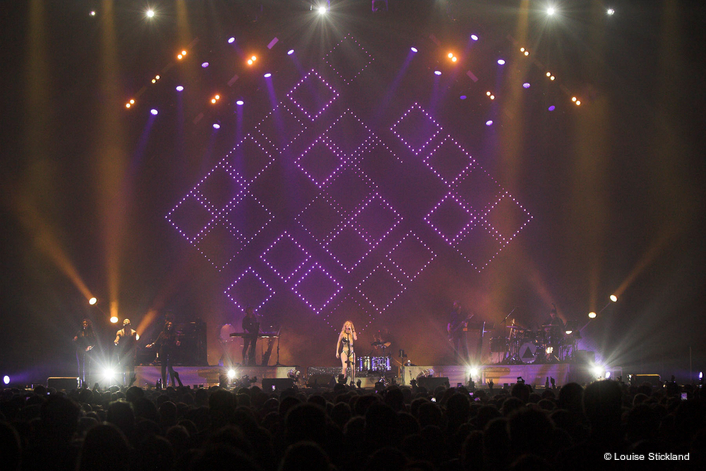 Haddow ran the Catalyst – fitted with the latest Phoenix SDI input cards  -   and cut the six cameras using a grandMA2 light console and the User Key buttons to mix the cameras - just as if it was a regular vision mixer.

Dispensing with the ‘standard’ PPU and going direct to screen from the Catalyst enabled a serious reduction in the latency across the system.

The cameras comprised three operated Sony D50s – one at FOH and two in the pit, one of which was a hand-held that migrated onto the stage at certain points – plus three robo cams dotted around stage and operated by Iain Rendle back stage. 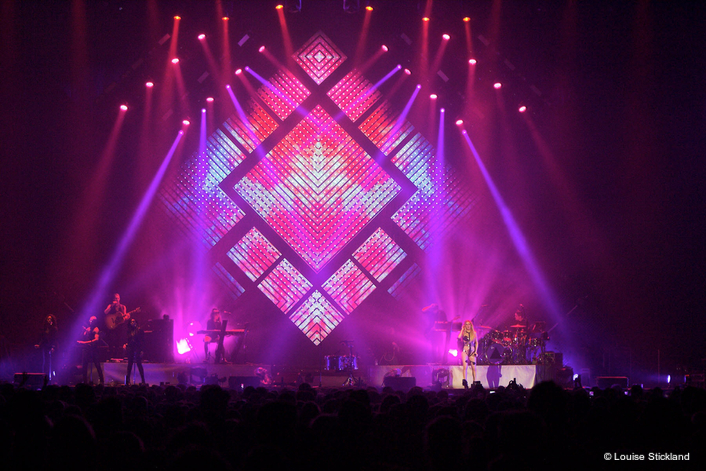 Haddow – known for his creative partnership with Davy Sherwin on Snow Patrol amongst other work – mimicked the style and treatment of the playback content and lighting with the IMAG rather than presenting anything traditional, in the process adding some flourishes of his own Catalyst wizardry.

The design used the video as a truly multi-purpose tool – for colour, movement and special effects as well as to bring a high-impact scenic feature to the party with the structural nature of the LED screens.

Carter and he both remarked that it’s been excellent working with XL and four different video surfaces from the same high quality manufacturer – complete with seamless colour matching and quality standards. 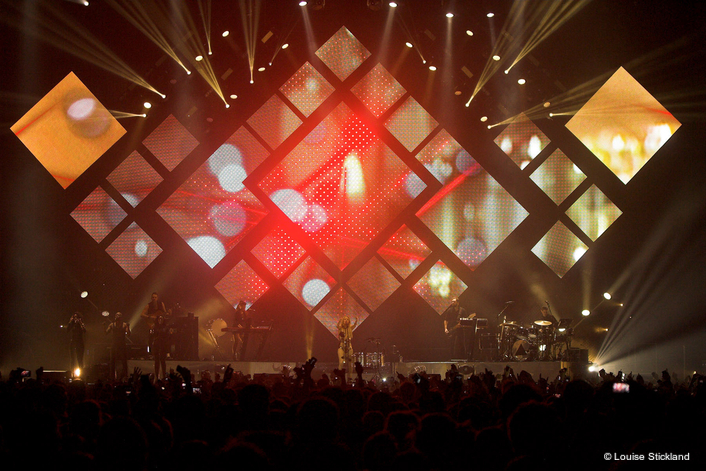 Iain Rendle was joined on the XL crew for the arena tour by Crew Chief Gary Beirne, Ed Jarman (Engineer) and Gaby Linford, and Lite Alternative’s Crew was Chiefed by Martin Garnish.

Haddow is now taking the tour on its next US leg, where it reverts to the original theatre version with 19 touring frames of Radiant MC-18 Hybrid supplied via XL Video’s US office, and he will be running lighting and video while Carter starts on the new Elbow tour.

Phil Mercer comments. “Cate has achieved the tricky task of making 71 square metres of LED look like so much more - sometimes treating it as a single screen surface and sometimes highlighting the four distinctly different products (7, 12 and 18mm + Hybrid tiles) that made up this complex design. It's a great showcase for our brand-new touring packaging particularly the ease in which diamond shapes can now be built out of our standard rental frames - with no added structural elements to rig / de-rig daily.”