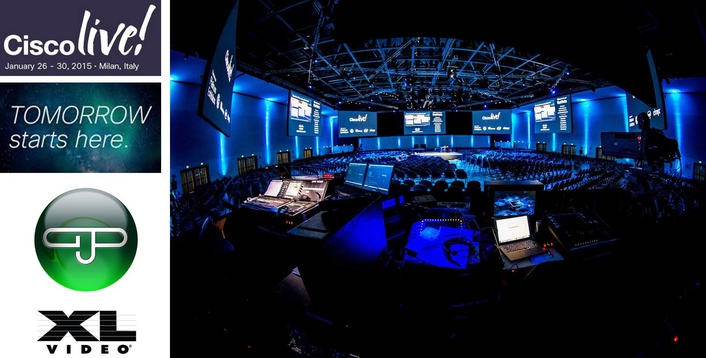 Cisco Live! is the industry's premier education and training event for IT, networking and communications professionals, and XL Video’s team was project managed by Nick Askew and Chris Ellis. Their brief included the provision of a diverse selection of AV set-ups to 42 breakout areas, some for up to 300 people. 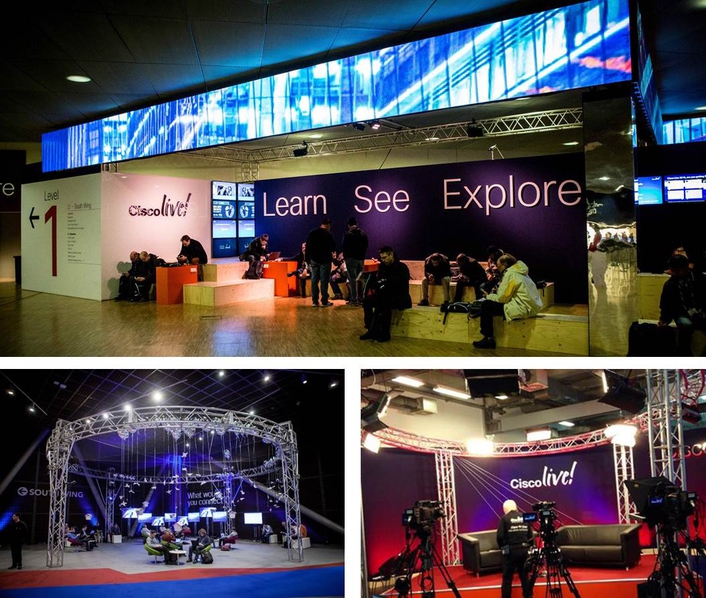 An impressive main room hosted the plenary sessions and accommodated 3,500 delegates. A primary presentation stage was built in the centre of the room and connected via a runway to a satellite ‘demo’ stage that was used for product demonstrations and further presentations. The two stages and catwalk allowed speakers to get right in amongst the audience.

Eight large custom projection screens – all 10 metres wide and in 16:9 format - were installed in each corner and along each side of the room, their positions calculated to allow all 3,500 people attending the sessions an optimum view. Positioning these screens in relation to the seating layout was one of the biggest challenges when planning the event.

Numbered 1 – 8, the even numbered screens showed one set of content while the odd numbered ones showed different footage – all related to the presentation and onstage action.

The screens were each fed by a doubled-up pair of Barco 26K projectors for maximum intensity, and rigged on corresponding trusses above the central stage, focussed on their specific screen ‘target’. 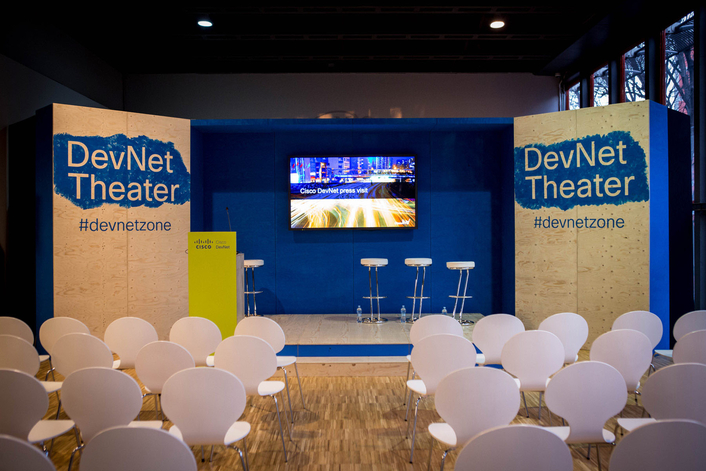 A Millumen media server was used for storing and replaying the playback video content and the presentation opening and closing VTs. It was chosen for the layer flexibility needed to run the show and the intuitive re-colouring which was applied live to some of the content to correspond with specific elements of the presentation … including lasers.

The server outputs were fed to a Barco Encore system operated by Jonathan Bond who co-ordinated the screen management. Also feeding into this – via several fibre lines between the stages - were multiple laptops running Keynote and PowerPoint along with various devices and demo sources.

Two of XL’s Sony HXC-100 broadcast cameras, both fitted with 86x lenses, were positioned at the FOH area and at one end of the room with two more RF controlled HXC-100s mounted on pedestals around the central stage.

In addition to these, feeds from four Bradley CamBall 2s – two on stands in the audience, and two overhead on trusses – were routed into two PPUs, a Panasonic HS400 and an HS 450.

The HS450 was mixed by Jerry Rosenfield and fed into the Barco Encore for outputting to screen. The Panasonic HS400 mix was cut by Jonathan Chard working for Cisco TV, and fed to Cisco’s web TV streams.

Working onsite in around over 40 areas simultaneously was a challenge, together with fitting all the kit in the main plenary room. Rigging the projectors in the precise positions needed to line them up with the screens took time, patience and entailed working around lots of other departments all needing to get their equipment in place.

All Credit to John Carss for his careful room design and detailed drawings! 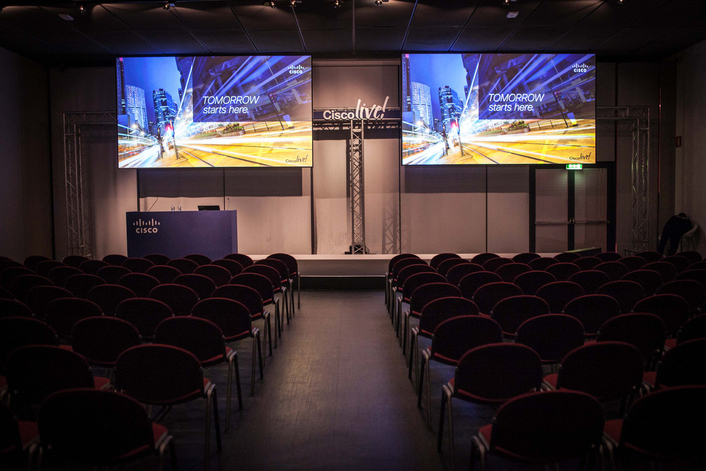 XL built bespoke ‘switch boxes’ for each of the breakout areas which gave the presenters an intuitive and user-friendly ‘button box’ interface so they could quickly and seamlessly hook their laptops and other devices into the installed AV systems. These systems are dubbed ‘RCPXL-10’.

Working with GPJ Production Managers Dave Johnstone and Henry Davey and their team of Technical Room Managers, Chris ensured that all the equipment was in the right room at the right time. The logistics to make this a streamlined process included customised flightcase labels and multiple truck drops at different parts of the venue. Chris was ably assisted onsite by David Roberts and Greg Scobles, with each PM taking charge of an area of the venue.

XL supplied 152 panels of Unilumin 3.9mm LED to form a 38m x 1m LED strip on to which images and event information were displayed using a Coolux Pandora’s Box media server system. Graham Vinal and Gareth Manicom were responsible for the screen installation and operation which required diligent adjustments to ensure the differently angled parts of the wall met as closely as possible. Nick Diacre operated the Pandora’s Box, working with the GPJ team to create content and recommend the best use of Cisco’s media assets. 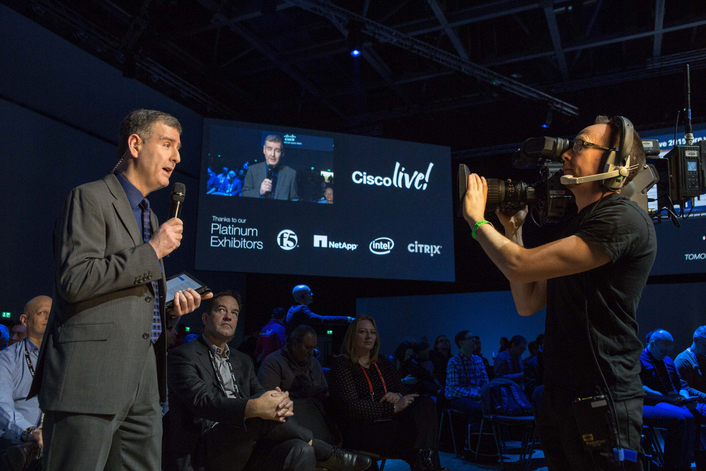 “It was great to be asked by Mark (Bannister, GPJ Technical Director) and the team to come back for a second year on Cisco Live!.  It allowed us to build on year one, making tweaks and improvements that helped the show to run even better this year. We couldn’t do it without the excellent crew involved, with everyone from all departments working together to ensure every detail is right. Hopefully we’ll get to do it all again in Berlin next year!”