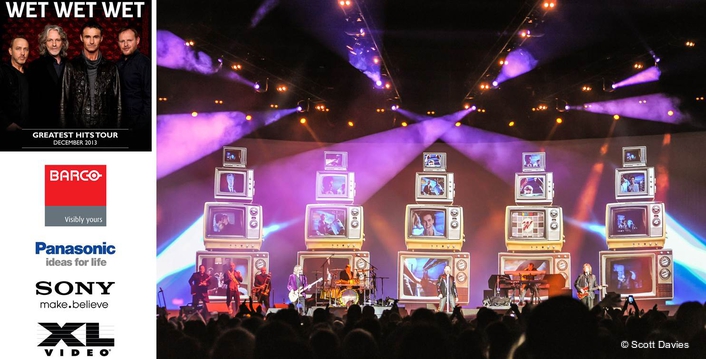 The Band’s manager Dougie Souness and Production Manager Pete Bell approached XL to assist with realising a production design created in conjunction with Lighting Designer Martin Nicholas and consultant Miguel Ribeiro, who worked closely with the band on the creation of content.

At the heart of this was an 80 ft wide rear projection screen gently curved – cyclorama style - by two end-wings angled at around 15 degrees.

They wanted the video system to be as flexible as possible, and to be able to switch playback content and IMAG camera footage between the main screen and two side screens.

XL’s Project Manager was Paul ‘Macca’ McCauley who comments, “We were really pleased to be involved. The design was classy, elegant and very appropriate to the look and feel of the show which reflected the Wets’ remarkable career spanning over 25 years”. 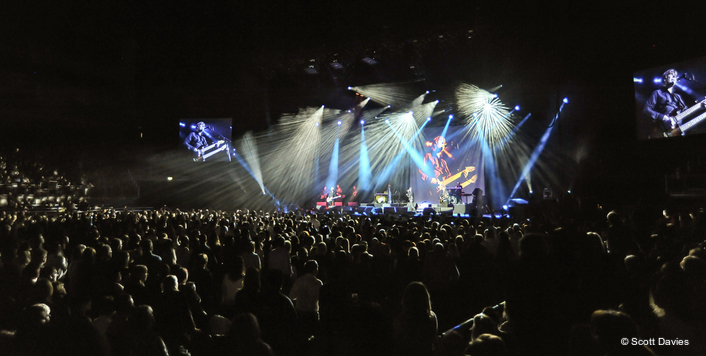 The main screen was front projected on to by three Panasonic PT-DZ21KU machines rigged on a dedicated truss (together with three more providing ‘hot’ back-up), all edge-blended together using the projectors’ inbuilt software to fill the canvas evenly.

These were fed with playback content stored on a Catalyst media server which was operated by Robin Haddow. Most of the video cues were triggered by timecode from the band’s backline.

The camera package comprised two operated Sony HXC100s, one stationed at FOH with a long lens and one in the pit, together with two ‘lipstick’ cams positioned strategically onstage to pick up various band members.

Joining Robin Haddow on the XL crew were Pete Tilling who oversaw the projection elements and Mark Young who looked after the cameras.