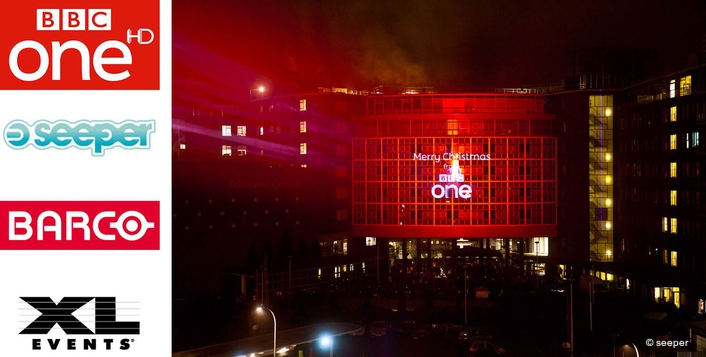 .
When BBC One’s ‘The One Show’ was chosen to launch the BBC One Christmas line-up, they commissioned arts and technology collective seeper to produce a large scale projection on to the front of the BBC.

The projection was used to map seeper’s specially-produced promo film of the BBC’s upcoming Christmas shows including Strictly Come Dancing, Doctor Who, Miranda, and EastEnders on to the building in Wood Lane, west London.

In the weeks running up to the launch, seeper brought in XL Events to specify and supply the projection element of the project. Several meetings and site visits were required to select the most effective placement for the projectors.

With companies such as Network Rail and Marks and Spencer in the close vicinity, great consideration was taken as to how the rigging of the projectors would affect the neighbours of the chosen location, The Ugli Building.

The decision was taken to rig via The Ugli Building’s car park. Impact Productions provided a weather-proof structure on which the projectors were stacked. Hewden supplied a large crane which transported the projectors, each weighing 250kg, up to the platform at the top of the building.

To satisfy the requirement for a very high Lux output, XL Events specified the newest, brightest Barco projectors to achieve the 150m throw to the BBC building. Five Barco HDQ-2K40 units, each supplying 40,000 lumens of brightness, were used to project the image which was over 35 metres wide.

Line-up and content tests on the evenings prior to the launch were very successful with the full brightness on view. On the evening of the live broadcast, a blanket of fog appeared across west London, and gave the projection a cloudy diffusion which reduced some of the clarity of the image. The high brightness levels of the Barco 40k units, however, meant that the images were still fully visible on camera. 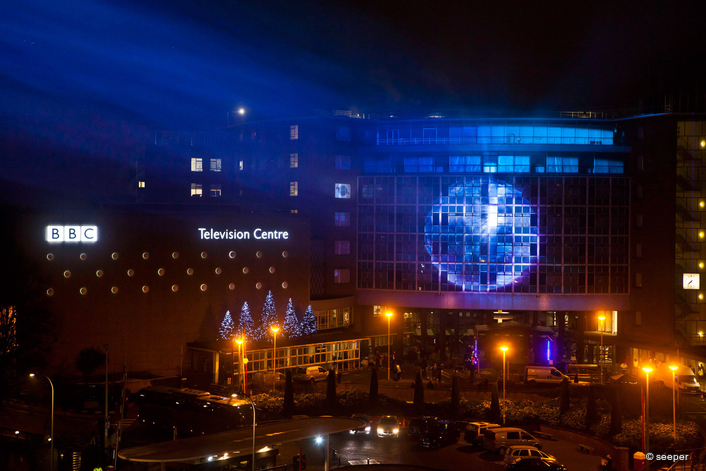 Mark Rooney, Project Manager for XL Events commented: “We’d like to thank seeper for the opportunity to work on this high profile project. As expected, the Barco projectors performed brilliantly. It was unfortunate that the weather absorbed a little of the brightness on the night, but luckily Evan Grant from seeper recorded a great video the previous evening so the full impact of the projection can be seen as intended. Great work Evan!”

To check out the video of the projection, visit: http://seeper.com/bbc-one-christmas-launch/