XL Events were brought on board by WRG as the technical supplier for video services and attended early design discussions for the event. Utilising the expertise of Project Manager, Guy Vellacott and Technical Director, David Mulcahy, XL was able to recommend and specify a number of cutting edge technologies which helped shape the overall event.

“Our early involvement in the project meant we were able to talk to WRG about new technologies and demo the applications of these as relevant to their event,” explains Guy Vellacott. “In pre-production, we could pre-visualise the entire show using WYSIWYG integrated with the Pandora’s Box media server, which helped shape the content and delivery onsite. 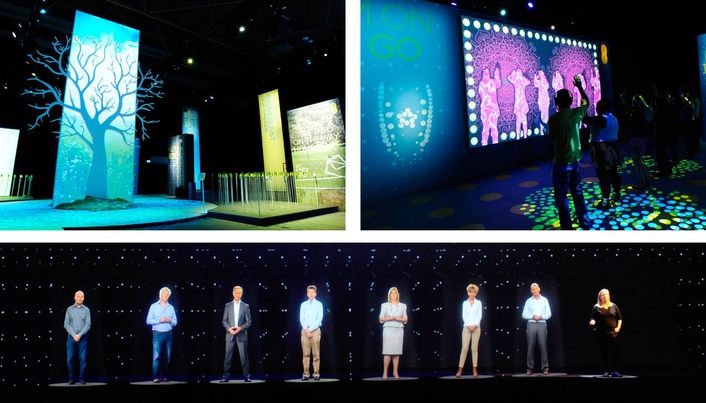 The presentation revealed details of the new superfast services using both live and virtual holographic presenters. This line-up of Everything Everywhere executives changed constantly through the week and the projections had to be adjusted for the line-up changes. All of the projections and variations were managed using Coolux’s Pandora’s Box media servers supplied and controlled by XL Events.

The presentation content invited all of the participants to get involved and experience the new EE service. At the end of the auditorium section, the rear screen split apart to reveal a huge hall containing multiple immersive presentations and activities.

Each stand or element was designed to reflect the superfast service and the ethos of EE customers being able to do whatever they want with their mobile data service with no delays.

Elements included a social networking wall, with tweets and posts about the new 4G EE service; a 4-lane sprint track where attendees competed to record the fastest time; a silent disco where the dancer’s images appeared on a special video wall; a games area with Kinetic controlled Fruit Ninja; a corn field with virtual butterflies on Archos mini tablets arranged around an 8 metre high projection mapped tree; and vending machines with NFC payment technology.

Guy Vellacott comments: “With over 40 projectors and 22 media servers this is one of the largest interactive corporate events I have worked on in the UK. We’d like to thank David MacIntyre and the team at WRG for bringing us on board for this exciting project.”

XL Events is a division of XL Video Limited and is a specialist technical supplier for the events industry. The XL Events team has offices in Birmingham and London, UK.