WWE Continues To Amaze With Fairlight’s Constellation And Xynergi Consoles 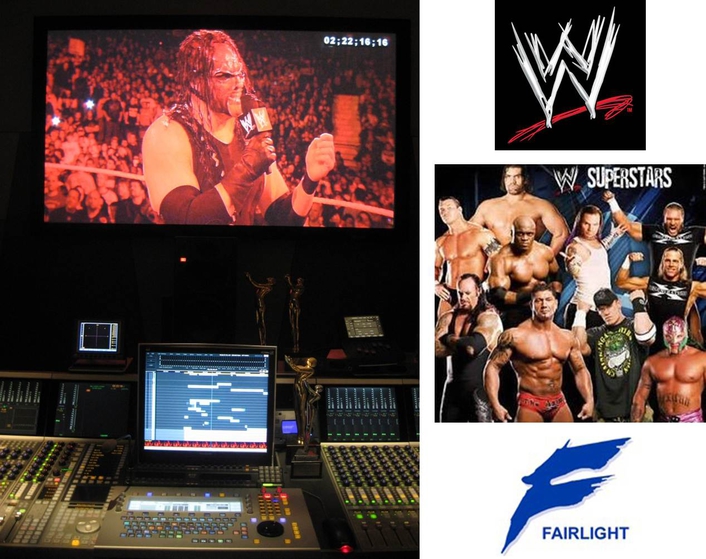 “The editing capability of the Xynergi is so far beyond anything else”
In order to deliver the full effect of bone crushing body slams and death-defying stunts that continue to leave fans in awe, the World Wrestling Entertainment (WWE) recently invested in Fairlight’s Constellation and six Xynergi consoles to meet its post-production needs. The WWE headquarters, located in Stamford, Connecticut, is the home to one of the largest entertainment companies in the world, reaching 13 million viewers in the United States while also broadcasting its shows in 30 languages to more than 145 countries.

The WWE, which produces six hours of domestic broadcast programming every week, two DVD home video titles a month, anywhere between 10-30 promos weekly, along with 15 pay per view shows per year, needs to handle the vast amount of work that is often presented in a short amount of time. “Due to the reliability and speed as well as the ability to maintain a constant workflow, the WWE has become a huge advocate for Fairlight,” says Chris Argento, VP of post-production at WWE.

“The editing capability of the Xynergi is so far beyond anything else,” says Argento. “If we ever had to switch from Fairlight it would slow us down a great deal. The ability to pull MXF files from our server to the timeline is so easy. For us to have full HD video and MPEG-2 access is huge. When projects are done we can pull any video source that has been worked on and access video files instantaneously.”

Argento went on to discuss the vast library of sound effects and the ease of selecting and using each feature of the Constellation. “The AudioBase feature allows us to grab any spot effect from the server without having to sort through many pages of data. It is a huge time saver when there are hundreds of thousands of effects.”

Argento has become fond of a feature that he calls the voice to picture trick. “In the Constellation room, we are able to finish a domestic show in English and print it to delivery format. From there we print the full mix with English commentary on the first two inputs and use the mix-minus outputs to bounce over and re-record a different language version at the same time in 130 countries. When the voice-over session is finished the international mix is already complete except for a couple of small tweaks. This saves us at least 15 hours of work.”

Another feature that benefits Argento is the ability to import from different timelines with HD. “It also allows for the ability to edit on the timeline even though it isn’t a specific video editor. This lets me do reversions on the fly, another way that the console keeps workflow constant and saves time. I have used many systems and have never seen anything that can process video and keep productivity consistent as Fairlight.”

For Argento and the rest of the WWE production staff, the training of new employees has been seamless. “There is the perception that if you aren’t using a specific program or computer you are out of luck, however, with Fairlight it is extremely easy to bring in new people and get them adjusted to the consoles very quickly.”

The support that Fairlight has offered is excellent, according to Argento. “Fairlight has helped us sync our entire system with the different rooms we have, allowing us to access all projects in every room and have access to all 96 channels and HD Video everywhere. The support, including future requests for improvements, has been top of the line. With the help of Fairlight we continue to meet our goals and expand on the work that we are able to do.”