Five/Four Productions sees this recording as a quantum leap in high resolution recording technology that promises to deliver to the consumer the most realistic sound reproduction to date. 11.2 MHz Direct Stream Digital technology is a digital platform that utilizes a 1-bit ultra-high sampling frequency that results in a recording that is 256 times the temporal resolution of CD. 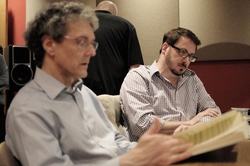 The transmission of many ultra high resolution audio channels is only possible using RAVENNA Audio over IP networking technology employed by Horus and Pyramix. Multiple audio streams plus control information is connected with a single Cat5e/6 cable and uses standard network components.

Recording Producer Thomas Moore commented that "Five/Four always strives to capture sound in the most natural and realistic manner that reproduces pure and true. To be able to merge the sounds of period instruments and singers with this very modern technology is the perfect way for us to deliver the most realistic audio experience, just as if you were standing with the performers among you."

Five/Four Recording Engineer Robert Friedrich said "Recording to Direct Stream Digital has always been a must for us to deliver the most revealing and accurate sound. Taking DSD from 2.8 MHz to 11.2 MHz doesn't just step it up to the next level, it catapults it!"

"I am excited that Boston Baroque could be part of this landmark recording," remarked Martin Pearlman, Music Director of Boston Baroque. "Capturing the detailed nuances and transparency of our period instruments has always been important to us, and now it is possible on a higher level than ever before."

This recording marks Five/Four's dedication to promoting leading edge recording technology to deliver only the highest resolution recordings to their clients.

About Five/Four Productions, Ltd.:
Five/Four Productions, Ltd., an independent audio production company which was formed in 2009, has won sixteen GRAMMY© Awards to-date for Production, Engineering, and Performance Excellence, plus Japan's Grand Prix Award along with other international industry recognition. More than three decades of critical acclaim by the world's most respected critics, publications, and audio consumers alike have garnered Five/Four the reputation as one of the world's leaders in recording and production excellence. Exclusive Five/Four Reveal-SDM Technology
and innovative production technique brings the famed "Five/Four Sound" to any project large or small.