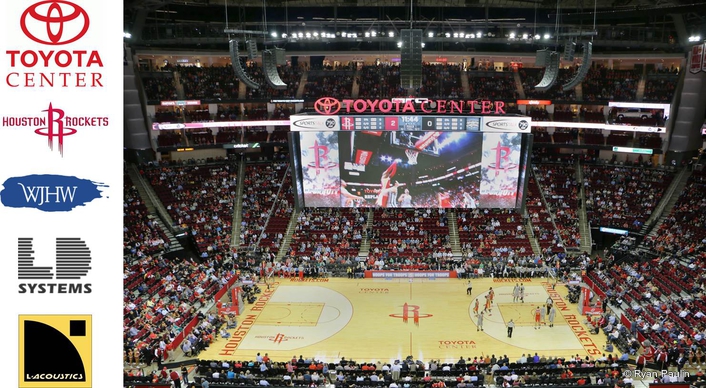 The Houston Rockets take on the San Antonio Spurs at a home game on November 6 sonically reinforced via L-ACOUSTICS’ K2
Modern sports venues have to do it all – host major sports contests one night and top-selling music artists the next. That’s an economic imperative at a time when teams and promoters are competing for the consumer entertainment spend. The venue with great sound that can do it all wins, and that’s why Toyota Center, the arena home of the NBA Houston Rockets, comes out on top.

In October, the arena, which opened in September 2003 and seats 18,000 for basketball and over 19,000 for concerts, installed a new L-ACOUSTICS K2 sound system – the first K2 system permanently installed in a major professional sports arena. The cap to a two-year AV makeover that included new HD video scoreboards, the sound system, designed in SOUNDVISION by project consultant Wrightson, Johnson, Haddon & Williams and AV systems integrator LD Systems with support from the L-ACOUSTICS US Applications team, primarily comprises 72 K2 enclosures flown in six arrays.

Lightweight arrays hung using existing rigging points produce high-impact musicas well as enhanced media impact and speech intelligibility
The installation was completed and tuned just in time for the start of the 2014-2015 NBA season, when the Rockets hosted the Boston Celtics on November 1. Underscoring the exceptional flexibility and range of the K2, the new system is also potentially available to be tied into by a slate of top concert artists in the fall, including shows by the Black Keys, Justin Timberlake, Usher and Fleetwood Mac.

First making its stadium debut at the opening and closing ceremonies of the 2014 Winter Olympic Games in Sochi, K2 has proven to be the solution for myriad unique situations at installed-sound projects, and Toyota Center proved no exception. “Sound quality in an arena is always a challenge, but we had some additional challenges on the Toyota Center project,” observes LD Systems Sales Engineer Kevin Broussard. “In addition to coming up with a line-source system design that would provide even and seamless sound coverage all the way around the arena, we were also instructed to use as many of the existing rigging points that had been used to support the old trap-box-style system as possible to keep the venue flexible for touring music shows. The K2 was the perfect solution for that thanks to its ten-degree inter-cabinet angling. That, combined with the K2’s power and throw, allowed us to use fewer boxes to achieve the same dispersion and SPL, so we didn’t need to use more rigging points than were already in place.” 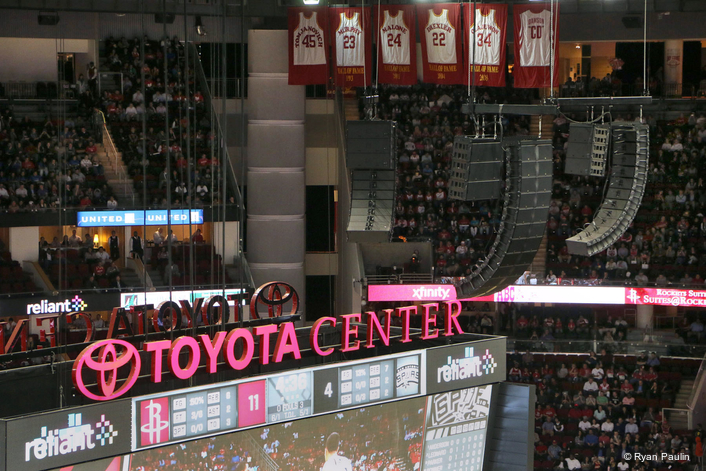 Toyota Center Manager of Audio and Video Scott Foulkrod says the result is unique to an arena. “It’s really unusual to look up and be able to see clearly across the entire top of the arena,” he says. “You get a great sense of openness. It really was a nice, clean install.”

The team’s ownership also wanted a sound system that would enhance the fan experience, and the K2 does exactly that. Configured with two pairs of arrays facing the north and south sides of the arena, and one each facing the longer-throw east and west ends, the 10-degree inter-element flexibility assures virtually seamless coverage over 360 degrees and in the horizontal plane as well.

“This feature allowed us to limit the box count per cluster to 12, which significantly helped keep the sightlines clear,” says Broussard. “A line array in an arena has the potential for serious horizontal overlap between arrays, with a nightmare of phase cancellation between clusters and the possibility of comb filtering. But with the K2, there is minimal horizontal overlap, and the sound is uniform from top to bottom. With this kind of pattern control, we can be very, very precise.”

NBA arenas have also become famous for their low-frequency response, yet the Toyota Center setup uses only 18 subs. This is possible, says Broussard, because the K2’s enclosure is so wide-ranging that most of the bass in the system is coming from the speakers; the subs are there to simply extend them.

“The K1-SB subs reinforce the low end, adding power and punch, but most of the bass is coming from the K2s themselves,” he marvels. “The system behaves very much like a touring concert system, yet it still maintains very high STI [Speech Transmission Index] readings.” These, says Broussard, range well above average, between 0.58 and 0.72 – “phenomenal,” in his words. 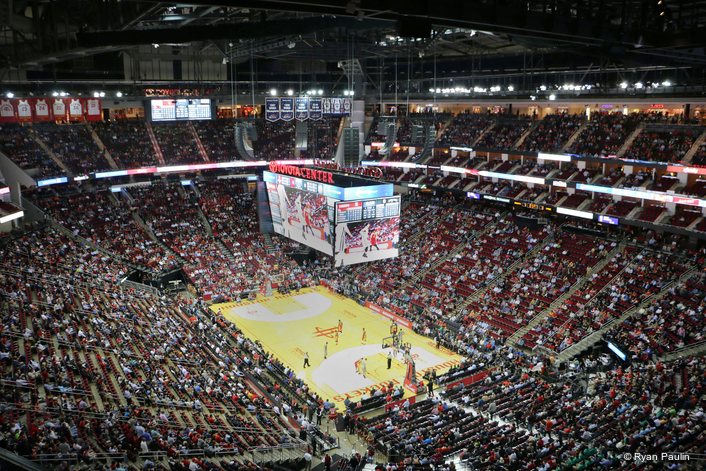 Foulkrod says the L-ACOUSTICS K2 succeeds in both roles. “We needed to have very high intelligibility for the PA announcers, so that the fans would really understand every word, and we wanted to be able to create some good thump for music, and this system does both,” he says on a break from rehearsals for the Rockets’ home opening day. “The sound is clear and powerful but without having to be overbearingly loud. We’re looking forward to a great basketball season and a great-sounding season, too.”