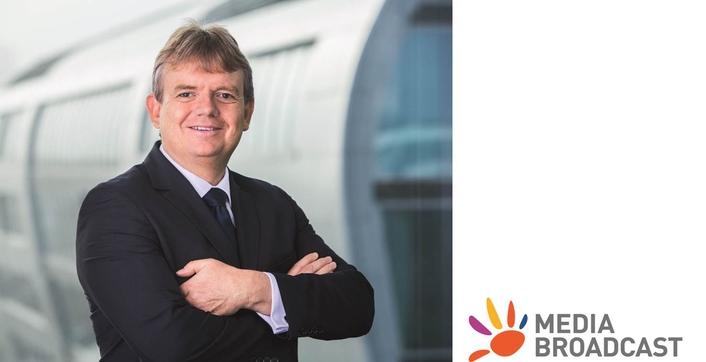 .
MEDIA BROADCAST GmbH announced that the shareholders' meeting has appointed Wolfgang Breuer as the company’s new Chairman of the Management Board. Breuer takes over the management of the full-service provider for the broadcast and media industry with effect from 1 October 2013. He succeeds Bernd Kraus, who is leaving the company on the best of mutual terms.

Wolfgang Breuer (48) has been a member of the MEDIA BROADCAST Management Board since 2011. As Chief Technology Officer (CTO), he has to date been responsible for the overall management and development of the infrastructure operator’s technology-related matters. Prior to joining MEDIA BROADCAST, Breuer served as CTO at the international telecommunications companies Romtelecom and Comstar-UTS Russia, and as CEO of T-Mobile Croatia. Prior to this he held successive management positions at Deutsche Telekom AG, including Vice President Central Europe. Breuer began his career in 1990 as an international project manager for the semiconductor manufacturer Leybold AG, after studying at the universities of Cologne and Michigan and the Harvard School of Business.

Dr. Marcus Englert, Chairman of the MEDIA BROADCAST Supervisory Board, said: "We are delighted that Wolfgang Breuer is taking over as Chairman of the Board of Directors of MEDIA BROADCAST. He is an experienced manager who has successfully led a similar-size company in the role of CEO, and who knows every last detail of the technology-driven broadcasting business. In recent years, as CTO, he has provided important impetus for the future growth of MEDIA BROADCAST in the digital age. We are confident that he will successfully lead the company into the future with technical expertise, long years of management expertise, and a strategic vision. Wolfgang Breuer will ensure continuity in the company’s management – MEDIA BROADCAST will remain a reliable partner for its customers long-term and will continue to invest in state-of-the-art infrastructure services.”

Dr. Marcus Englert added: “Bernd Kraus successfully stabilized the company in a challenging environment and initiated numerous ideas for new business, setting a decisive course for MEDIA BROADCAST’s further development. We owe him great thanks for his successful work, and wish him all the best for the future.”

MEDIA BROADCAST is one of Europe's leading full-service provider in the broadcasting and media sector. Its core business is the planning, construction and operation of national and global media broadcasting platforms for television and radio using modern transmission, cable and satellite networks, MEDIA BROADCAST is part of the TDF Group and serves around 750 national and international clients: public and private broadcasters, TV and radio production companies, international broadcasters and network operators, media companies and the cinema industry. The portfolio covers almost all services in the broadcasting process chain, from production to content management to transmission.