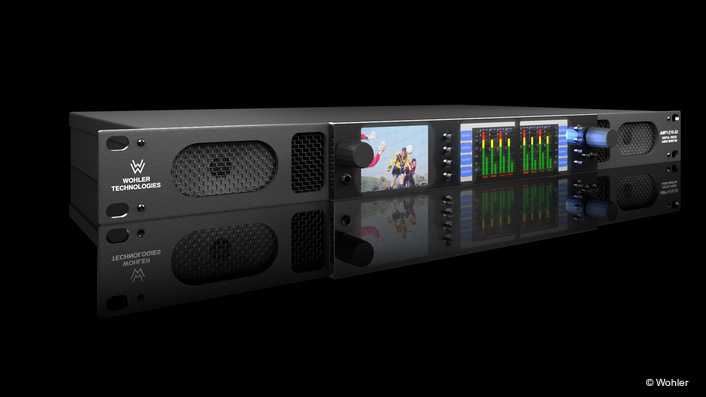 AMP1-E16-3G
Wohler Technologies Inc. today announced further enhancements to its AMP1-16-3G and AMP2-16 Series 16-channel audio monitors with new features and menu options that bring even greater convenience and functionality to multichannel monitoring. Improved access to audio levels and settings, newly added live mixing capabilities for the AMP2-16 Series, and more powerful monitoring and control functions at their fingertips now give operators the flexibility to adapt in real-time to the monitoring demands of complex broadcast operations. 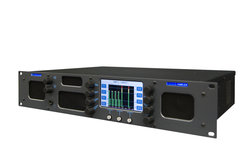 With available redundant power supplies and new Free Mix mode, the AMP2-16 Series is now fully transmission-chain ready and thus reduces the dependence on traditional audio mixing consoles. When equipped with AES or analog output cards, the AMP2-16 Series Free Mix mode supports mixing and outputting of any combination of channels. Through an intuitive configuration menu, users can easily control levels, mix multiple input channels to multiple output channels, and set front-panel control options. These mixes can be performed independently of the audio monitoring function, while the AMP2-16 Series audio monitoring and level metering functions can be used to monitor the result of the mix.

The Channel Trim control can be used to adjust the output level of each source into the output channel(s). The newly added Channel Trim hot keys provide the ability to instantly access and control the output mix levels of any set of AES or analog output channels. AES and analog output channels can now be assigned as sources in the Monitor menu, giving the operator the ability to monitor selected mixed or level-adjusted outputs visually and audibly along with selected input channels. When individual channels are soloed, users now can listen to them in the left or right speaker as assigned, or automatically in both speakers.

The AMP1-16-3G and AMP1-E16-3G™ audio monitors from Wohler offer 16-channel multirate 3Gbps/HD/SD-SDI and AES audio monitoring, the latter with Dolby® E and Dolby D support. A new option within the Dolby menu allows AMP1-E16-3G users to enable audio for Dolby E only or for Dolby Digital only, or switch automatically to pulse code modulation (PCM) if no Dolby bit stream is present. Both units, along with the AMP2-16 Series, feature a new audio delay menu option that allows operators to add from zero to 170 ms of delay, in increments of one ms, to monitor audio in real-time as they listen, making it easy to compensate for delays in LCD monitors. The Hardware Options menu has been updated to simplify adjustment of the analog output reference level.

Up to 16 channels on the AMP1-16-3G can be selected for simultaneous display and concurrent monitoring on an innovative OLED screen that is easily user-configured for bar graph meter look, scale, and ballistics. As volume and balance are adjusted, new on-screen displays show operators their current settings. The loudness measurement on the AMP1-16-3G and AMP1-E16-3G has been enhanced to display graphically as an open bar graph encompassing the cluster upon which the loudness is calculated. Loudness units are measured in LKFS, which coincides with the meters’ decibel scale.

Wohler also has equipped its AMP1-16-3G, AMP1-E16-3G, and AMP2-16 Series monitors to support FTP copying of presets to and from a computer for rapid configuration of other units or for archiving and future use.