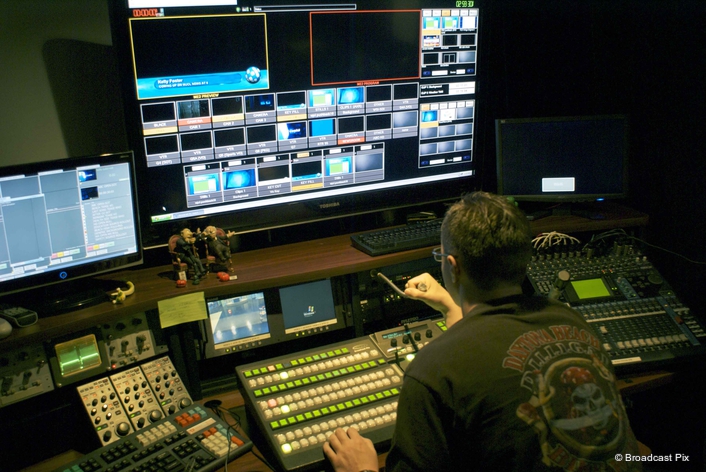 WJCL, an ABC affiliate owned by New Vision Television, and WTGS, a FOX affiliate operated by New Vision through a local marketing agreement, share studios and resources for local news production. The facility produces four newscasts on weekdays. The stations simulcast a morning news show, WJCL broadcasts local news at 6 p.m. and 11 p.m., and WTGS offers a 10 p.m. nightly newscast. Each station also broadcasts its late newscast on the weekends.

Slate 5000 features like Fluent Clip Store and Watch-Folders are used during newscasts, and a Yamaha audio mixer is slaved to the Slate 5000 switcher so an audio-follow-video system can be employed. Graphics are built through ENPS and Vizrt systems, and most editing for the newscasts is done through a Quantel Newsbox. The HD newscasts also use Sony HD cameras in the studio and in the field. Bohlin said the station’s technical directors really like the new setup.

The Slate system is tightly integrated into the file-based workflow

New Vision made the decision to provide local news in HD to provide a ratings spark. However, the move to HD news was not part of a facility-wide digital upgrade – and Bohlin needed to keep expenses and personnel costs down. He said the Broadcast Pix integrated production system was ideal for his needs.

“It’s expensive to make everything digital at once, but in this world, you don’t have to. You can take a product like Broadcast Pix and integrate it into your plant,” said Bohlin. “This was really the way to leapfrog into local origination in HD. It’s perfect for what we need to do.”

“The design provides an end-to-end HD upgrade and file-based workflow around the Broadcast Pix,” added Lynn Rowe, president and CEO of One World Technologies, which served as design consultant and dealer for the project. “We were able to achieve traditional quality and reliability at a fraction of traditional costs to design and implement.”

The Slate system is tightly integrated into the file-based workflow of the station by utilizing Mediamano asset management, Rhozet transcoding, and Aspera FTP acceleration. Rowe said the transcoding allows access to content from file-based sources such as syndicators and on-site Omneon servers. Plus, the Slate 5000 can be used as a second-level backup to the Quantel and Vizrt systems, if necessary.

Rowe said the installation is similar to KIMT, another recently renovated New Vision station. Based in Mason City, Iowa, and also serving Rochester and Austin, Minn. (DMA #153), the CBS affiliate has a similar workflow but without the additional Quantel and Vizrt systems.

Broadcast Pix is the leader in integrated live video production systems. Its Granite native HD and Slate hybrid HD/SD/analog systems create compelling live video. They run unique Fluent file-based workflow software that streamlines production and improves functionality. With its integrated switcher, multi-view, CG, clip and graphic stores, and aspect and format conversion, Granite and Slate are a fraction of the cost of a legacy control room to buy, staff and operate. They are future-proof, as they can upgrade to 3Gbps 1080p. Customers include leading broadcast, webcast, podcast, entertainment, mobile, corporate, education, religious, and government studios in more than 70 countries.