Wisycom Performs Along with the stars on X-Factor Denmark

.
From studio to television, X-Factor Denmark has already discovered its own winner in the MTH400 wireless handheld transmitters, MTP40 belt-pack transmitters and MRK960 receivers from Wisycom. By using Wisycom’s sophisticated RF solutions, X-Factor Denmark has ensured its pop star performances and backstage cues are delivered with perfection each time. This is the third year Wisycom has been entrusted to help the program discover the country’s future pop stars.

Anders Bech Lassen, Audio Engineer for X-Factor Denmark and founder of Bech Lassen Lyd, has been a longtime Wisycom user. After having experience with the system from his work on a different show, and realizing the range and sound were better than every other system he had previously used, Bech Lassen brought the wireless transmission equipment to the X-Factor Denmark production. 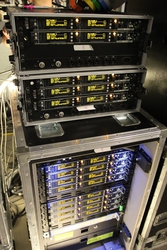 “We knew we had to use Wisycom for X-Factor because of the clear audio and wide frequency range their wireless systems offers,” says Bech Lassen. “We just set the Wisycom transmitters on the judges’ table and we never have to worry about the talent stepping out of range when they move around the studio. The range and sound is so much better than every other system on the market. I don’t have the time to constantly check over a system, so I needed one I could depend on and that’s why we use Wisycom.”

With 70 RF channels in-use on the X-Factor set for both in-ear and wireless microphones, Bech Lassen is tasked with the difficult job to ensure the six elimination episodes have perfect audio quality, building excitement for the finale which is shot on location in Herning. Prior to using Wisycom, Bech Lassen estimates 60 to 70 percent of his time was spent making sure the wireless devices worked properly and the signals were not competing with one another. With Wisycom, the process to check the equipment has been reduced to only 10 percent of his time.

According to Bech Lassen, he finds Wisycom’s unique Push-to-Talk (PTT) feature, available on the handheld transmitters, an asset for a talent type show like X-Factor. Wisycom’s “Push-to-Talk” technology allows the presenter or performer to press a button, causing the remote switching of the receiver’s output-line from the “main line” to the additional “intercom line,” to be able to talk “off-air” directly with the producer team if issues/questions do arise.

“Before we had Wisycom, our microphones were open all the time in the ears of the producers, which can cause listening fatigue and be distracting,” says Bech Lassen.  “But now with the PTT, it’s just on when the talent wants it to be on. You can have this capability on any microphone using any Wisycom handheld product and don’t have to set up any additional frequencies.”

The show uses the Wisycom handheld transmitters along with Schoeps mics for hosts, such as Eva Harlou, and DPA’s d:facto™ vocal microphones for the performers. The belt-packs are used for all in-the-ear systems. The antenna gain adjustment is another component Bech Lassen says is a good feature Wisycom solely provides.

“With the antenna gain I can optimize my signal and reduce the gain to check there is no disturbance to the signal,” Bech Lassen continues.

Bech Lassen and his crew also needed a wireless system that allowed the show to film both inside and outside of the studio for the six elimination episodes and the finale. Before Wisycom, Bech Lassen notes that it was a difficult task to fulfill when filming the finale, which takes place outside the studio on location in an arena. Wisycom products have helped bring the X-Factor Denmark finale episode switch from studio filming to on-site filming in Herning’s arena with up to 20,000 spectators. Even with the larger channel count and distances that talent and hosts were traveling around the venue, Anders was able to maintain a clear RF signal with Wisycom’s products.