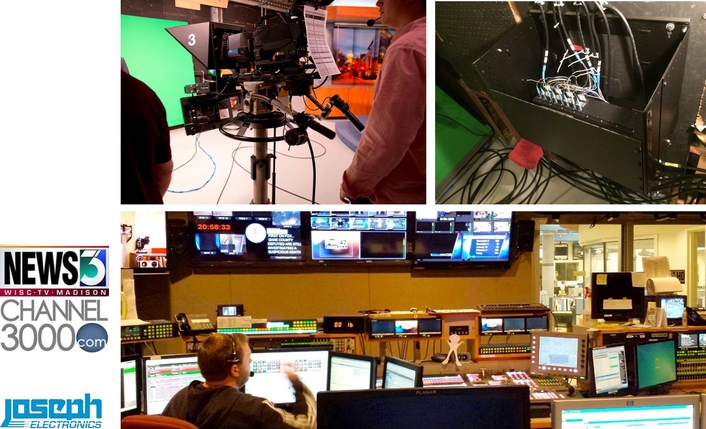 "Before we had this system, I had nightmares of getting a call 10 minutes before a newscast that one of the cameras was down — something that would have required two engineers and hours of downtime to fix. But now that we have the patch panel, we're in a much better maintenance situation," said Kevin Ruppert, engineering maintenance supervisor at WISC-TV. "Now it's a simple matter of taking the faulty cable out and patching in a new one at the panel and the camera head. Joseph Electronics helped us design the system, and because of the JE team's reputation and expertise in broadcast infrastructure, we knew the job would get done when and how we wanted it."

In its original setup, WISC-TV had four long SMPTE hybrid camera cables that went all the way from each of the four cameras on the studio floor, over a cable raceway, and into the CCUs in the control room. In that situation, WISC-TV would have had to remove the entire length of cable connecting the affected camera in the event of a catastrophic failure. The broadcaster couldn't afford that kind of downtime, so it needed an easy way to maintain or repair cables without interrupting operation. The solution was a patch bay on the studio wall that would allow WISC-TV to maintain two separate cables — one from the camera to the wall, and another from the wall to the CCU.

WISC-TV called on JE and its partner Token Creek to help make the system a reality. JE fabricated the access boxes and supplied new cables for the camera/studio side of the link, where WISC's old cables had been subject to more wear and tear. Token Creek handled the on-site fiber terminations, while WISC-TV did the copper terminations.

"We like working with Joseph Electronics because they provide high-quality cable assemblies, connectors, cable, and wall panels that are tailored to the needs of broadcasters," said Brendan Clark, engineering director at Token Creek. "The JE team specializes in broadcast infrastructure and excels in providing the service required to put all of the parts and pieces in place to get things done right."

"Token Creek is a new source of fiber installations, and by teaming up on this project, we helped WISC-TV streamline its cable maintenance and keep its cameras working reliably," said Yohay Hahamy, president of Joseph Electronics. "Designing custom solutions for facilities like WISC-TV is one of the most important ways we provide value to our customers. We enjoyed our experience working with the WISC-TV team to update its infrastructure and create a more logical setup."

About Joseph Electronics
Joseph Electronics (JE) is an authorized stocking distributor for more than 100 premier broadcast and pro A/V brands with stocking locations in both Illinois and California. JE also designs, manufactures, and supplies innovative custom fiber solutions — such as the Caddie Series, DFT Series, and 4K fiber transport gear — for broadcasters and system integrators alike. Equipped with a state-of-the-art fiber lab staffed with fully certified professionals, JE can fabricate, terminate, or repair any connector, assembly, panel, breakout, or interface in use today. JE has served the broadcast industry for more than 65 years and has representatives in California, New York, Colorado, Georgia, and London.