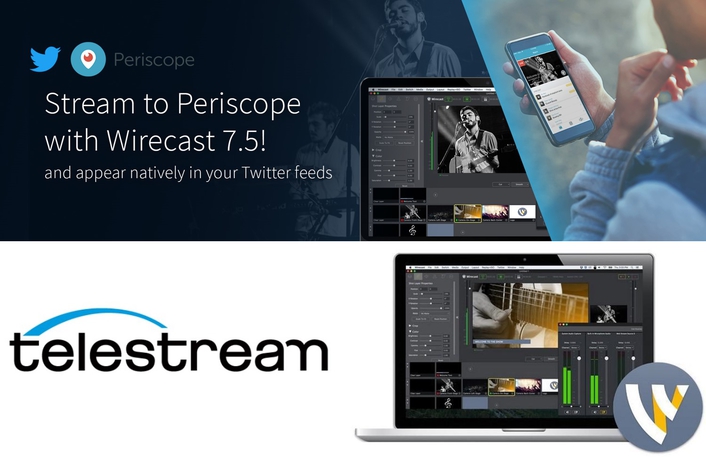 Telestream, provider of digital media tools and workflow solutions, today announced Version 7.5 of its Wirecast live streaming and production software. In a strategic move aimed at strengthening its position as the leading live stream feeder platform to social media networks, Telestream has announced Wirecast support for the Periscope/Twitter API. This means that any user, from tech-savvy consumers to online broadcasters, can employ Wirecast to stream live full motion video to Periscope.tv, which will appear natively within their Twitter feeds.

Wirecast 7.5, available immediately, provides the user with intuitive, powerful production capabilities, GPU-accelerated encoding, and a streamlined user interface that allows users to effortlessly create and stream high-quality live broadcasts from their computers to dozens of popular destinations such as Twitter, Facebook Live and YouTube, as well as to custom streaming servers with just a few mouse clicks.

Telestream believes that the combination of Wirecast and Periscope/Twitter will appeal to a range of markets, especially online broadcasters that want to leverage Twitter feeds for live video. “We anticipate that news and celebrity and influencer posts will be popular applications of this technology mix,” said Scott Murray, VP of Desktop Products at Telestream. “With Periscope/Twitter added as a native destination within Wirecast, users have the means to add rich, professional production values to live video streams on Twitter – something that we’re confident will win more eyeballs and bring users more followers.”

“Today, Telestream is the only company that has succeeded in enabling users to take content from the broadest range of sources – from mobile devices, to multi-camera productions and real-time feeds – to produce and deliver live video content and streaming media easily and cost-effectively over the widest range of social networks and other destinations. After many years investment, we are leading this market and we intend to build on our strength and success,” stated Murray.

Wirecast represents one of the market’s most tried and trusted live streaming solutions. As a result, the company is strategically positioned to solve live streaming media workflow and deliverability challenges by leveraging three core competencies: encoding and transcoding, including media compression for video and audio; partner integrations that enable best-of-breed workflows; and unprecedented commercial live streaming expertise.

These core competencies form the foundation of the Telestream strategy for live streaming. Being able to provide live streaming infrastructure, production capability and services to make it all work means content owners and event producers rely on Telestream and its broad range of solutions to fulfill all facets of their streaming media vision and business model.

Wirecast Studio is priced at $495, and Wirecast Pro, priced at $995, adds support for more advanced production features and additional input sources. Upgrades from previous versions of Wirecast will start at $179. Wirecast 7.5 with Periscope/Twitter native, live streaming support is available now. For a trial download and/or to buy Wirecast 7.5 go to https://www.telestream.net/wirecast/whats-new.htm