Winners and Losers Emerge in Europe's Race to a Fibre Future 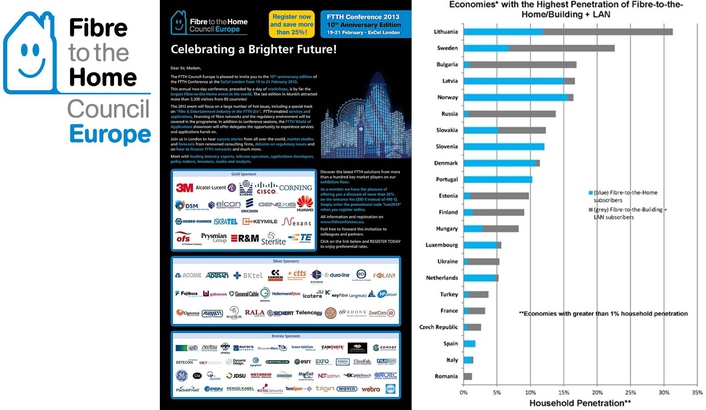 Russia sees a dramatic 42% increase in the number of FTTH subscribers, while more steady growth of 15% is reported in Europe
European fibre to the home (FTTH) deployment continues to grow steadily, but the gap between the leaders and laggards is increasing, according to the latest figures from the FTTH Council Europe, presented during a press conference held during the FTTH Conference 2013 at London's ExCeL exhibition centre today.

Russia has emerged as a clear fibre leader in the region. The country added 2.2 million new FTTH subscribers in the second half of 2012 – more than all of the 27 Member States of the European Union combined – to reach a grand total of 7.5 million fibre-connected homes. This corresponds to a dramatic increase in FTTH subscribers of more than 42%.

Across the EU27 countries, the number of FTTH subscribers continued to grow at an accelerated rate of 15% in the second half of 2012. During this period, Europe added 820,000 subscribers in total, bringing the number of fibre-connected homes to 6.24 million. Scandinavia, Baltic countries and the Netherlands contributed 26% of these new subscribers, Eastern European economies 33%, and France and Portugal 30%.

The top five "dynamic" economies, where not only subscriber growth in the past year was high but also where new 2012 subscribers represented the highest proportion of total subscriber at end-2012 were Turkey, Ukraine, Spain, Bulgaria and Russia. In Turkey, subscribers more than doubled in the last year. Spain, new entrant in the FTTH ranking since June 2012, also confirmed its dynamism. 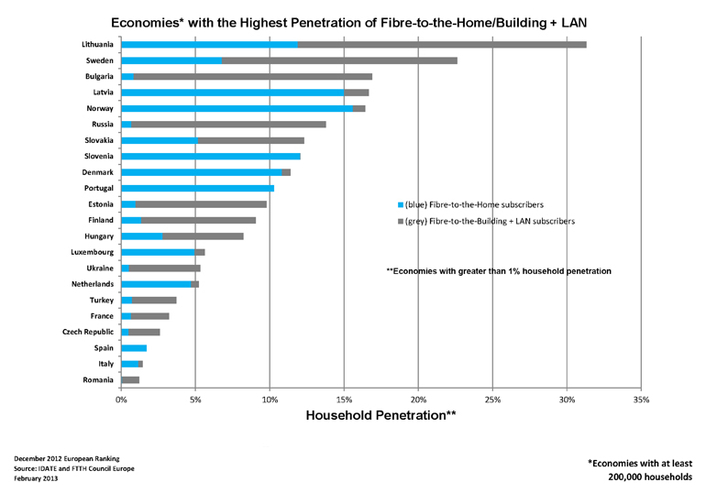 In terms of household penetration, the dominant fibre nation remains Lithuania, which already has 100% coverage of FTTH and over 31% of homes connected to fibre. Sweden takes second place in the European FTTH Ranking, with 22.6% of homes having FTTH subscriptions. In the ranking, 10 nations can now claim more than 10% FTTH penetration, up from seven in June 2012. In order from the top they are Lithuania, Sweden, Bulgaria, Latvia, Norway, Russia, Slovakia, Slovenia, Denmark and Portugal.

"Eastern Europe and Scandinavian countries have reinforced their position as fibre leaders, and the disparity between the early and late adopters is becoming even more apparent," said Karin Ahl, President of the FTTH Council Europe. "These FTTH leaders are gaining an economic advantage over their less well-connected neighbours. Good communications infrastructure helps to retain existing businesses and attract new ones. Fibred-up nations can make a head start on deploying new services like remote health care and smart grid technologies. Countries that delay the roll out of FTTH are looking at a serious lost opportunity to prepare for their economic future."

Many of the major western economies are still dragging their feet over fibre. Italy and Spain remain at the bottom of the FTTH ranking, and once again, Germany and the UK failed to qualify. The number of fibre connected homes in the UK stands at less than 0.1%.

The FTTH Market Panorama, which is updated twice a year by IDATE for the FTTH Council Europe, records the number of subscribers in each country across the continent of Europe, and ranks them according to the percentage of homes taking a direct fibre connection. The panorama includes both FTTH and fibre to the building or FTTB, an approach suited to apartment blocks where the building's existing cabling can be used to make the final connection to the customer.

To be included in the FTTH Ranking, a country must have more than 1% of households connected to FTTH and more than 200,000 households.

About the FTTH Council Europe:The FTTH Council Europe is an industry organisation with a mission to accelerate the availability of fibre-based, ultra-high-speed access networks to consumers and businesses. The Council promotes this technology because it will deliver a flow of new services that enhance the quality of life, contribute to a better environment and increase economic competitiveness. The FTTH Council Europe consists of more than 150 member companies.