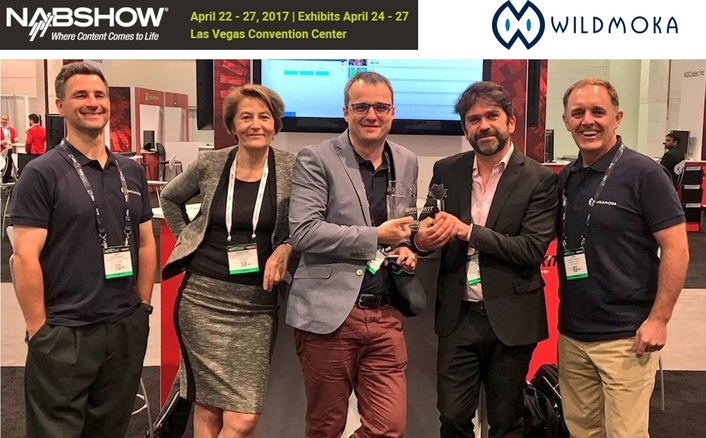 Award highlights French company’s inaugural entry to the US market

Wildmoka, a leading provider of cloud-based, live video editing solutions, has been named a “Best of SPROCKIT Start-Up” at this year’s NAB Show. The award coincides with the company’s first year of doing business in the US market.

Wildmoka, based in Sophia-Antipolis, France, with offices in Paris, San Francisco, Dallas and Sydney, serves the broadcasting, cable and video content rights markets.  SPROCKIT works in a syndicate to help the NAB and industry leaders find game changing startups in media & entertainment.

The “Best of SPROCKIT Start-up” award for Wildmoka caps a year in which the company’s cloud software platform has been adopted by the largest media companies in France, including Altice / BFM, France Televisions, Canal+, beIN SPORTS and Orange.

“The hot topic now for rights holders is content monetization, and clients who can publish fastest win the most viewers and ad dollars,” said Cristian Livadiotti, co-founder at Wildmoka, “Wildmoka’s automation technology gives clients the fastest way to clip and publish content to social and digital.  This automation also benefits consumers because editors can focus on telling better stories instead of manually editing content.”

Wildmoka’s core product, “Moments Studio,” primarily is used by clients to instantly clip and publish video content to digital and social.  Following successful campaigns for such events as the 2016 Olympics in Rio, the NAB Show 2017 officially marked the acceleration of Wildmoka’s efforts and investment in the US.

“We are proud to have Wildmoka as part of SPROCKIT and being voted one of the best start-ups shows they have something special,” said Harry Glazer, CEO and Founder of SPROCKIT. “It was exciting to see so many big media and sports firms visiting the SPROCKIT Hub at NAB to check out Wildmoka’s solutions.”

SPROCKIT is the media, entertainment and technology alliance of corporate executives and industry-vetted emerging companies showcasing and collaborating on products, services and new revenue models. SPROCKIT, in collaboration with and support from the NAB Show, shines the spotlight on the industry’s most promising market-ready start-ups from around the world. SPROCKIT start-ups have proven products, customers, and are ready to scale.

Wildmoka is a leading provider of live video edition & publishing in the cloud. Wildmoka’s widely deployed and easy to use video solutions enable immediate and massive short form video creation, editing and publishing. Wildmoka enables content owners and rights holders to face the growing demand for more video content on their digital and social platforms.