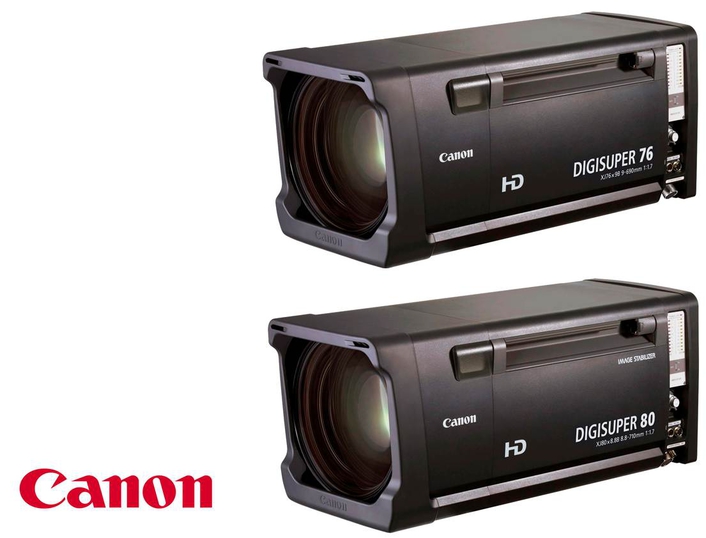 Through its 80x zoom ratio, the Canon DIGISUPER 80 adds an extra 5x magnification over its predecessor, the DIGISUPER 75. An 8.8 mm focal length gives wide angle  around 5% more than the DIGISUPER 75 which was 9.3mm.

Powerful on-field close-ups
Both the DIGISUPER 80 and DIGISUPER 76 are designed to deliver compelling close-ups from a distance. For instance, the triumphant smile of a record breaker within the context of a 70,000 seat stadium.

These close-ups are made even more impactful through the lenses’ excellent optical performance. This ensures both high resolution and high contrast throughout the entire zoom range.

Examples include optimal placement, (Ultra Low Dispersion) glass and UD fluorite to compensate for various aberrations, such as spherical aberration, chromatic aberration and field curvature. In addition, high resolution has been achieved from the center to the periphery of the image.

The output connector for both lenses is standard, that can be read with high-precision Data and can be synthesised with virtual systems for use in Studio and sports broadcasts.

Keeping pace with HD broadcast needs
The growing demand for HD content has, as expected, extended to sports, news and events broadcasting. With the transition to digital broadcasting, the demand has increased yet further especially regarding the coverage of worldwide broadcasting events using HDTV camera field zoom lenses.

The launch of the high magnification, wide angle DIGISUPER 80 and DIGISUPER 76 lenses, demonstrates how Canon provides enhanced solutions that are ready now to meet these specific broadcasting demands.