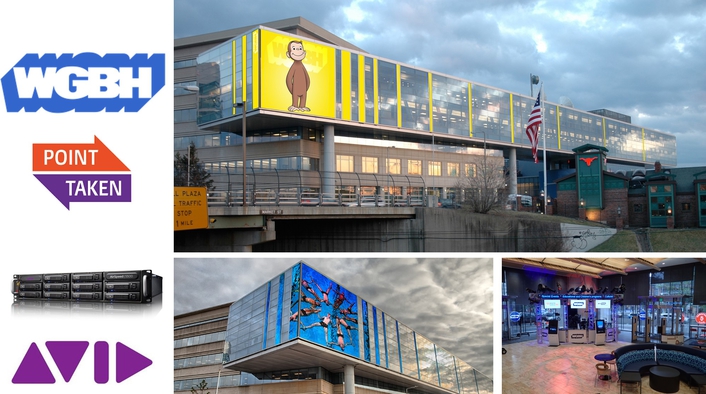 Avid® announced that Boston public broadcaster and long-time Avid customer WGBH has expanded its investment in the MediaCentral® Platform, the industry’s most open and efficient media platform, to make its media assets more quickly and readily available to production teams. With its latest investment in Avid’s comprehensive tools and workflow solutions, WGBH, the single largest producer of television, web and mobile content for PBS, modernized its local news operations and created a fast, efficient workflow for its national debate series Point Taken.

WGBH’s nightly news and public affairs programs faced a number of technology challenges due to outdated editing systems and a storage platform that was expensive to maintain. Following the successful implementation of an Avid workflow to integrate its creative teams and make it easier for production staff to find and access media assets, WGBH decided to replace its systems with a new integrated workflow powered by MediaCentral, putting everyone at WGBH on the same platform. WGBH worked closely with Avid to ensure a successful transition.

“Our goal was to tie everything into one ecosystem—whether it’s production, post, broadcast, metadata or cloud,” said Tim Mangini, senior director of production technology at WGBH. “Our local news team creates a program every day, and that program has to go out. We anticipated that the biggest challenge would be transitioning several systems at once with no downtime, but because the Avid workflow is so tightly integrated, it just worked. It’s a testament to our team and the folks at Avid who worked closely together on the implementation that we had 100 percent uptime.”

For the recent PBS series Point Taken, WGBH needed a fast-turnaround workflow that would enable it to quickly create and deliver multiple versions of the 30-minute show, which was shot with six cameras in front of a live studio audience at 6.30-7.30pm, and aired at 11pm the same evening.

WGBH designed a workflow powered by MediaCentral with Avid AirSpeed® and Avid shared storage, enabling multiple edit rooms to work on the footage simultaneously within seconds of the cameras rolling, and create multiple versions for different platforms, including Facebook and web streaming.

“Avid AirSpeed is becoming the de facto ingest and playout from our studio post-production units, largely driven by our local productions and news division,” said Chris Fournelle, post-production director at WGBH. “People don’t like change, but the ease of working with it is changing people’s minds.  Having a fully integrated system has required a culture change, but because it works well our teams have embraced it.”

Following the success of the new workflow for Point Taken, WGBH plans to use a similar workflow for its regional program High School Quiz Show at the beginning of 2017, giving multiple production staff access to media from the moment they start recording it.

“WGBH is yet another example of our countless inspirational customers that are keeping our community at the forefront of workflow best practices and helping to shape our collective future,” said Jeff Rosica, president of Avid. “By rolling out MediaCentral across more parts of its business, WGBH is realizing the benefits of having everyone on the same platform in terms of operational efficiency and flexibility, and making media assets more easily available to create the best content.”