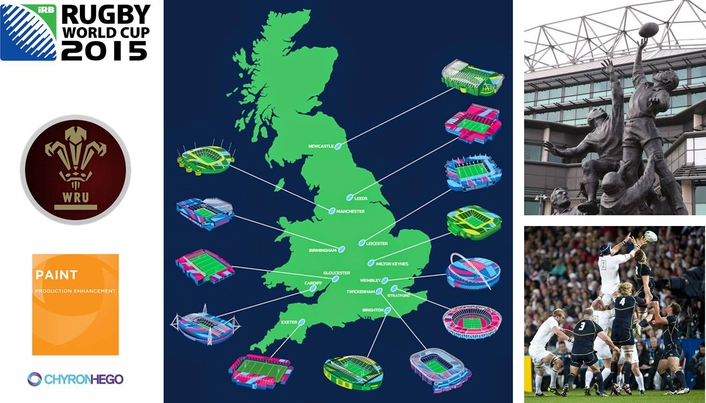 Marking ChyronHego's first win for the sport of rugby, the company today announced that the Welsh Rugby Union (WRU) has purchased the ChyronHego Paint telestration/visualization tool for use in a major, global rugby tournament taking place in England Sept. 18 to Oct. 31.

With the final match to be held in London's Twickenham Stadium, the tournament will draw 20 national rugby teams from around the world. As the governing body for 320 member rugby clubs in Wales, the WRU endorses Paint as a tool to help coaches visually analyze game-play. The WRU coaches will be able to use Paint's feature-rich telestration tools to enhance and highlight video graphically from practice and matches, adding a highly visual element to team and player training.

"Our Paint solution is in use by sports organizations and broadcasters around the world, not only for team performance analysis, but also to bring an exciting new element to on-air sports analysis for live broadcasts," said David Eccles, TRACAB project manager at ChyronHego. "We're excited about this partnership with the WRU. Not only is it our first Paint deployment for rugby, but it's going to highlight Paint's use in the sport's biggest and most globally recognized event. The WRU will be able to demonstrate to the world how Paint can be applied in virtually any setting. Whatever the sport, Paint can paint it."

About ChyronHego
ChyronHego is a global leader in broadcast graphics creation, playout and real-time data visualization with a wide range of products and services for live television, news and sports production. Joining forces in 2013 with over 80 years of combined industry expertise, Chyron and Hego Group offer award-winning solutions — such as the TRACAB™ player tracking system and the end-to-end BlueNet™ graphics workflow — under the collective ChyronHego brand. Headquartered in Melville, N.Y., the company also has offices in the Czech Republic, Denmark, Finland, Germany, Mexico, Norway, Singapore, Slovak Republic, Sweden, and the United Kingdom.