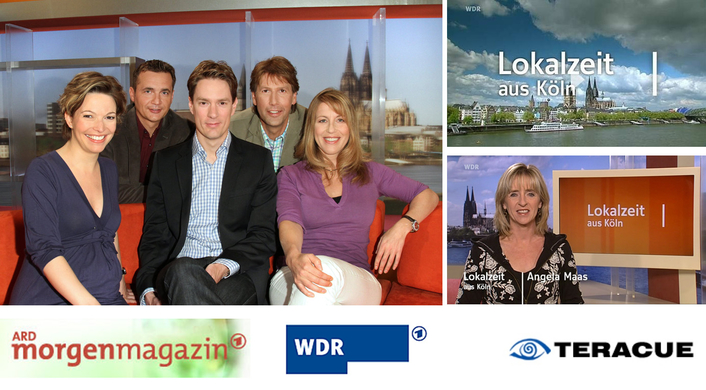 The WDR has installed a remote controlled camera in a weatherproof housing on a high-rise building on the eastern side of the Rhine river in Köln Deutz - opposite of the Cologne Cathedral. The camera can be directed at the cathedral city and the Rhine river depending on the production requirements and provides the live panorama image of the city of Cologne.

The camera signal is encoded using the Teracue Encoder and is sent to the WDR main broadcast facilities by network as an IPTV stream. The data stream is received and decoded in the production facility by using the Teracue Decoder DEC-200. The Decoder provides an SDI signal again at the output which is then fed into the central broadcast contribution infrastructure and is thus available in all studios and master control stations.

With this solution all studios of the WDR have access to the current live panorama view of the cathedral city. The panorama images are mainly used for the programs 'WDR Lokalzeit' (daily local news) and the 'ARD-Morgenmagazin' (morning and breakfast television).

The main decision in favour of the IPTV broadcast contribution using Teracue devices was among other things based on the low delay of the encoder/decoder units. It was just as essential to use robust products which could stand rough weather conditions. Thanks to its compact structure and fanless operation the Teracue Encoder and Decoder are superbly suited to this 24/7 use.

The original initiative and requirements came from the WDR Lokalzeit magazine, as live panorama images are constantly needed for insertion within the studio background. The IPTV contribution and central ingest now also enables the ARD-Morgenmagazin to use the images, and the signal can easily be supplied to other news programmes and for live productions.

Teracue was established in 1991 and currently employs 15 personnel. Development and the marketing of professional Broadcast and IPTV systems through an international network of specialised dealers represent the main business activities of the firm today. Clients include public and private broadcasting companies, corporations, banks, universities, clinics, medical and training facilities, fire services and police centres, aerospace companies, military and other federal organisations. Further information is available at