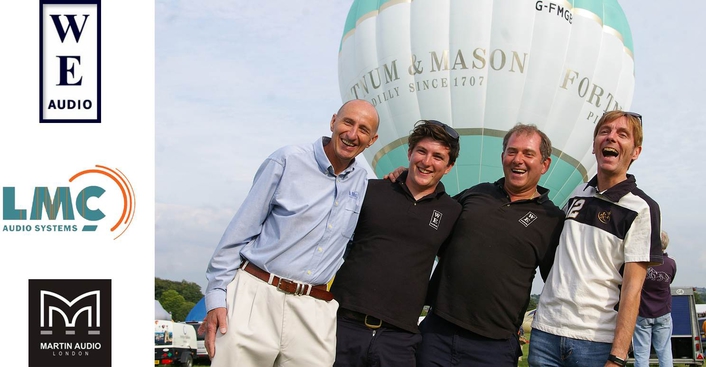 Deciding it was time to retire their existing front line system he first discussed his options with Tim Bamber, who handles technical sales at the Birmingham office of LMC Audio Systems, the Martin Audio dealers.

Remembers Bamber, "When Wayne initially discussed the possibility of a new loudspeaker system, I believed it had to be a solution that would match the quality of service that W E Audio offers. I knew that an investment in a technology-led, multi-cellular array system such as MLA Compact, as well as giving them a step-up in size and capability, would benefit W E Audio for years to come, and give them a unique place in the pro-audio rental market.”

And when Barker visited Prolight+Sound Show in Frankfurt this spring with co-director Rylan Machin — and met Martin Audio MLA advocate Simon Honywill — he was immediately convinced of the wisdom of this recommendation. 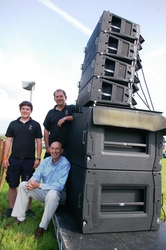 The meeting with Simon Honywill had been particularly poignant. For Machin had earlier studied for his degree in live sound at dBs Music (formerly Deep Blue Sound) in Plymouth, where Honywill and Jim ‘Tiger’ Parsons had been his tutors. “Once we started talking to Simon it immediately backed up Tim’s suggestion and made perfect sense to invest in a pioneering new system rather than one that had served its time,” said Rylan.

W E Audio’s reasons for adopting MLA, with its unique controllability, had been entirely logical. “We specialise in providing site public address and noise abatement — and so we needed a system that was musically versatile, with an output that belied its size, and would open up a lot of doors,” says Wayne. “We believe that ownership of this system will enable us to undertake more contracts in the sector and become a benchmark for local authority work.”


Specialising in this sector — and having seen MLA’s impact in controlling offsite noise pollution at the British Summer Time Festival in Hyde Park — they knew that a system that had been sanctioned by both Westminster Council and noise measurement consultants Vanguardia would be noted by local authorities up and down the country.

Specialising in this sector — and having seen MLA’s impact in controlling offsite noise pollution at the British Summer Time Festival in Hyde Park — they knew that a system that had been sanctioned by both Westminster Council and noise measurement consultants Vanguardia would be noted by local authorities up and down the country.

That event was particularly poignant, since it also became the first outing for W E Audio’s MLA Compact — sub-hired to Capital Sound for use as the rear delay sound towers.

As for LMC Audio, they have been W E Audio’s ‘go to’ supplier for a number of years. “They have provided us with a lot of our kit from digital mixing desks to accessories. The support we receive is phenomenal — they are real deal-makers,” says Wayne.

LMC Audio MD Paul Hinkly, recalls. “Transacting the complex quarter million pound deal was challenging — yet the real excitement is still to come, as we witness W E Audio’s deployment of MLA Compact’s unique capabilities across their portfolio of clients and applications.”

After debuting the MLA system at Hyde Park it immediately went out to Summer Pops at Buxton Opera House and then onto the high profile Bristol International Balloon Fiesta, where six stacks of four MLA Compact and two DSX subs were groundstacked in a networked ring around the 680m circumference site. It then headed to the Bournemouth Air Festival — where once again it formed the core of WE Audio’s site-wide public address system.

Summing up, Wayne Barker says, “This system is pure black magic. With it we will now be able to do any type of show — from a small town hall to the Royal Albert Hall.

“It’s great to be a Martin Audio partner — in fact the wheel has turned full circle. It was Pete Skan (Pete Howard) who first introduced me to Martin Audio all those years ago — and I’d like to dedicate the purchase of this system to him.”