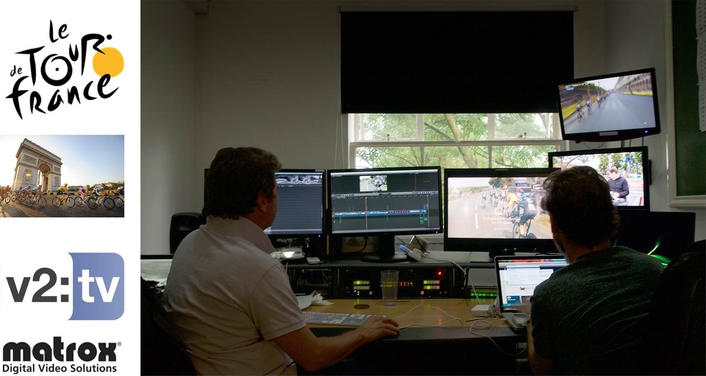 After a gruelling 23 days of cycling, with adrenalin pumping, rider Chris Froome raised his arms at the finish line of the 102nd Tour de France. VSquared TV was there to capture his triumph and other jersey-winning moments at every stage of the race.

VSquared TV is a specialist producer and distributor of road and track cycling, renowned for delivering award-winning Tour de France programmes. Clients include BBC and ITV in the UK and sports governing bodies such as UCI and British Cycling.

Keeping pace with the racers throughout the three weeks of the 2015 edition of the Tour de France was the VSquared production truck housing Matrox Monarch HD H.264 encoders to record transmissions. VSquared produced up to six hours of live coverage each day totalling about 80 hours, plus daily one-hour highlights packages that had to be edited and transmitted within two hours of each day’s stage finish. The programmes aired on ITV 4 in the UK.

Issues with DVD copies
In the pre-Monarch HD days, VSquared customarily made two DVD copies, one with timecode, of all transmissions to satisfy legal compliance requirements. Other requests for copies also came in from time to time. The recordings were done during transmission so a DVD recorder was needed for each copy. VSquared found making these DVD copies cumbersome and unreliable and the copies were bulky to store. When recording failed it cost them time and money to recreate the programme and playback of the DVDs on desktop software was less than ideal. To easily view the content, they created MP4 files, but that entailed running a conversion process on the recordings, which would take several hours.

MP4 file replaces DVDs, two Monarch HDs replace ten DVD recorders
Now with Monarch HD, H.264 encoded MP4 files are created on-the-fly from the output of the switcher; no transcoding is required. Using the source as video input with burnt-in timecode, one Monarch HD generates a file with timecode and another Monarch HD generates a clean file without timecode onto a NAS (network attached storage) drive. Copies are instantly available on the NAS following the airing of the programme and can be easily distributed by email or pushed to a drop box. A one-hour highlights programme using the “Matrox YouTubeLive 720p” preset keeps the file size below 1 GB. As these are viewing copies, full 1080 resolution is not required. Production assistants can now complete the compliance paperwork (music returns, transmission forms, etc.) immediately after the transmission, viewing the recording right in their desktop web browser. 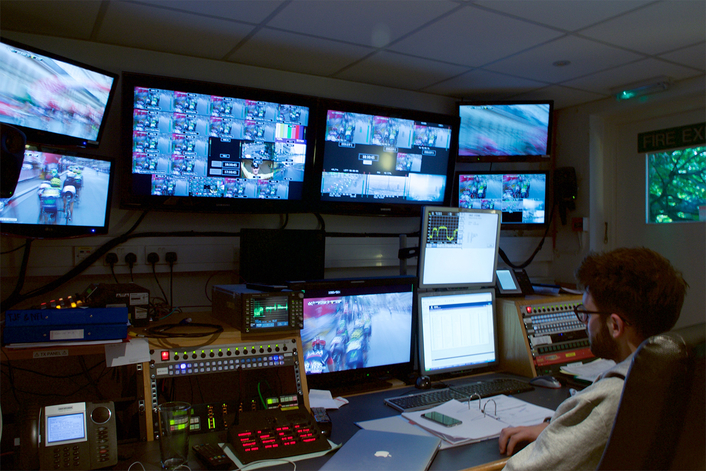 Complementing the TV programming, VSquared produces additional feature material and a nightly podcast for ITV’s website. Again, they need to produce viewing copies of that material. So they generate MP4 copies of everything they produce for the web as well using the Monarch HD.

According to Sylvain Swimmer, an Engineer at Timeline TV, VSquared’s facilities provider, “Set up of the Monarch HD, via the web-browser, was quite intuitive using the presets. It was the simplest option.”

Setup and workflow
The live programme output from the production switcher goes to two SDI-to-HDMI converters. From the converters, the HDMI outputs (one with timecode overlay) are fed into two Monarch HD devices that encode the signals to MP4 files and write them to Corsair USB 3.0 flash drives. To store and distribute the recordings, VSquared transfers the files from the USB drives onto a WD My Cloud NAS drive. All recordings can then be immediately viewed and accessed using a web browser by any computer on the same network.

Results
VSquared’s workflow has been modernised. Whereas before space and power had to be allocated for a bank of six to ten DVD recorders, VSquared now uses two compact Monarch HDs instead.

James Venner, Senior Producer and Director of VSquared TV commented, “The Monarch HD transformed what was a very clunky way of doing things with DVDs and editing and brought us into modern age. It means handling of viewing copies, logging copies and legal compliance copies is just so much more flexible than it was before.” He continued “Previously we would only have a limited number of DVD copies. If these had to be sent to someone they could easily get lost. Now, we can distribute infinite copies and we always have the master. Monarch HD allows us to create viewing media that is more convenient to use, easier to store and access at a later date.” 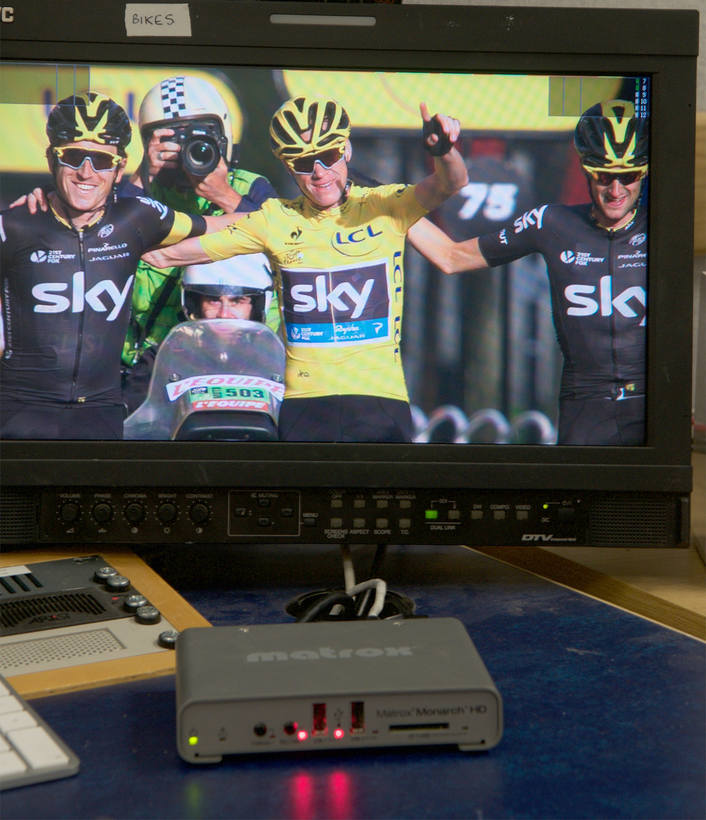 Future Plans
For the next big cycling event, the World Track Championships to be held in London in February, VSquared’s client will run a live updating website alongside the TV coverage. Live streaming is increasingly becoming a requirement and with the Monarch HD streaming and recording devices already part of their workflow, VSquared is well poised to meet their client’s future requirements.