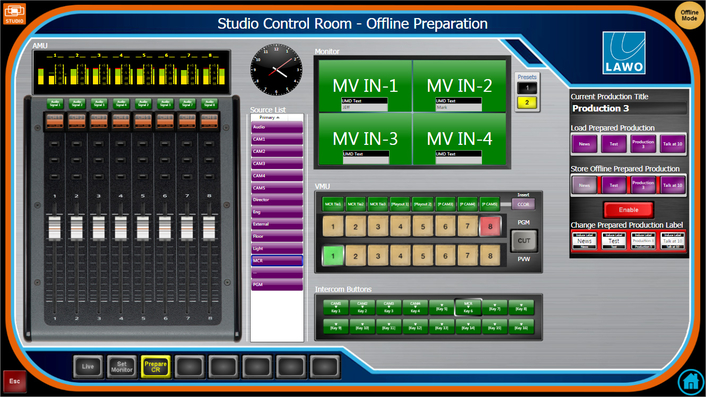 Lawo, manufacturer of the world-leading Broadcast Control and Monitoring System VSM (Virtual Studio Manager), has announced VSM Release 16.1. VSM is an IP-based Broadcast Control System, used in the most demanding production setups around the world. Available immediately, the release brings several new features, changes and bug fixes, including changes and updates to several VSM modules, as well as performance enhancements.

-    Gadget Server 5 now offers full support for the Dante protocol. Additionally, support for the Master Card status swap (active, passive) for Lawo DMS is now included.
About Gadget Server: All parameters that are available in the system are displayed in the Gadget list and indicate the actual status of the attached devices. Gadgets can be shown on panels or UMDs, triggered by GPIs, connected to audio or monitoring modules, or attached to signals.

-    In vsmStudio, double-clicking on GPIOs navigates through the GPIO configuration.
The user-assignable button attachment is a new function that allows users to change a button’s attachment. Unlike the mimic button, which replicates the entire functionality of another button, this new function solely copies the attachment of the original button (if compatible). This allows operators to configure a panel during runtime.
About vsmStudio: The vsmStudio software is the heart of the VSM system – it is the main administration and configuration tool that runs continuously on all VSM servers in the system. From here, an easy-to-use GUI provides all the functions, tools and setup wizards to control and customize a VSM system to a specific application and workflow needs. Additionally, all connected hardware settings and statuses are shown in real-time, with instant control and feedback.

-    The vsmPanel now supports HTML5 in the web browser page.
About vsmPanel: vsmPanel software runs on a network PC workstation client (Windows based) and, from a design and setup perspective, is identical to a hardware panel. In fact, the administrator can control and view any hardware panel in the system directly from this client, if needed. Any number of client licenses are possible, each offering a different control interface if necessary. Normally operated in conjunction with a touchscreen for intuitive operation, vsmPanel allows free design and layout of an operational interface, which may include pictures and images.

In order to update a system to the latest software version, customers should refer to the changelogs/release notes to make sure their particular system can be updated.

If you want to update a system, please contact our service department on +49 611 262 390 50, or via email at service@lawo.com. If you have any further questions, please feel free to contact the Lawo service team.