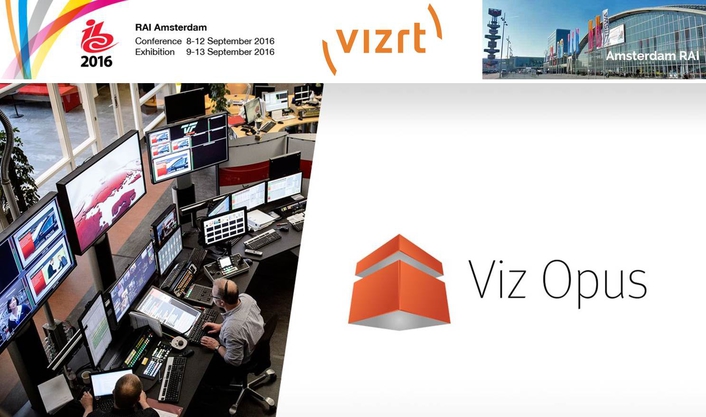 Journalist-driven productions
With Viz Opus, one journalist can prepare the live show rundown and drive the entire production of a live news show, with no need for dedicated technical operators in the control room. A journalist can easily build a rundown in their newsroom control system (NRCS) or use Viz Opus’ rundown creation tool, Showmaker. During live production they can control the entire rundown including lights, audio, and graphics and video transitions from the anchor position with a remote or keyboard. The easy to set-up workflow can be used for the production of live and non-live content for multiple platforms including VoD and online channels such as Facebook.

The SDI workflow captures the program using Vizrt ingest tools, recording to the Viz One MAM system. The recording can be scheduled so that the operator can focus on other areas of the production.

“This new journalist-driven workflow is an ideal way to create and deliver content for one-man-shows”, said Petter Ole Jakobsen, CTO at Vizrt. “It’s easy to set up, can be used on a live or recorded small-scale show, has professional tools for clipping and adding in graphics, and delivers to multiple platforms with our without commercials.”

Automation for secondary and pop up channels
Broadcasters needing to create secondary or temporary channels can do so easily using Viz Opus as a complete master control system. A complete channel can run on a single system, with live sources, video, graphics, audio and commercial break content. Viz Opus has been integrated with the IBMS traffic system to manage content for the commercial breaks. This feature uses the rundown management tool, Vizrt’s Showmaker, to organize and play out the content through the Viz Opus system. The as run commercial breaks list is automatically updated and exported to the traffic system.

Globosat (Brazil) recently created 12 temporary channels dedicated to cover the Rio Summer Games, each running on a Viz Opus system complete with commercial break content and traffic system integration. The configuration saved Globosat money by allowing them to have a complete commercial channel run through a single box. They were able to use the same graphics design for every channel, and multiple channels could be controlled by staff in the same room.