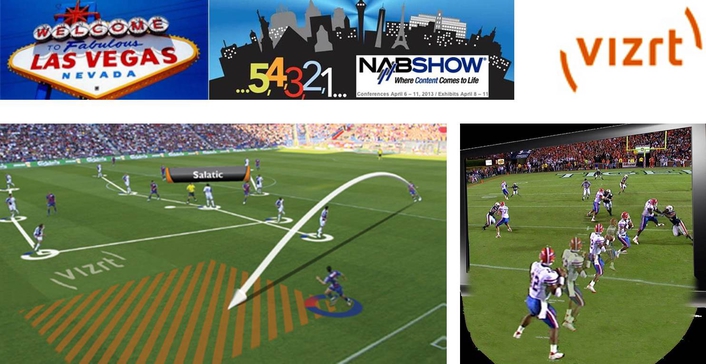 Virtual SloMo
At the 2013 NAB Show, Vizrt will present the new features and workflow improvements in Viz Libero 5.5, its 3D virtual sports enhancement and analysis system. Viz Libero 5.5 now offers Virtual SloMo, which uses an advanced image-based algorithm to generate ultra-slow motion (up to 1500 fps) footage rather than relying on high-speed camera systems. Virtual SloMo and other Viz Libero 3D replay tools can be used on any live camera image or remote video feed.

Grass Valley K2 Summit / Dyno Integration
Viz Libero 5.5 adds integration with the Grass Valley K2 Summit media server and K2 Dyno replay system, both of which are widely used in studio and remote sports production environments. It also improves integration with the entire Vizrt product family, including Viz Engine 3.6 for real-time 3D graphics and video compositing. This enables customized graphics to be rendered through a Viz Engine for greater creative control, inserting virtual presenters into the analysis clips, and the ability to present analysis scenes on interactive touchscreens.

New and improved effects
Viz Libero has been enhanced by many new in-game effects which help viewers to understand the different sports. These features include, among others, height measurement, ball impact, blocking wall, player grow, or zone focus. Many of the Viz Libero features, such as player marker, labels or offside and 3D wall, now have a customization interface within Viz Libero.

The Virtual Run that animates player movement, one of the big innovations in 2012, has received improvements. Besides simpler handling of the Virtual Run, new elements like a strobe effect have been added. An existing feature, the 3D Ball Track, can now be created with only one camera feed. This makes the feature faster, and more readily available, even for studio productions with only one multilateral camera signal.

The new version also adds a visual editor timeline, which accelerates post-editing of analysis clips. The timeline provides a graphical overview of the playlist including all recorded annotations and tracks so operators can edit and synchronize any graphics, 3D flights, or other elements.