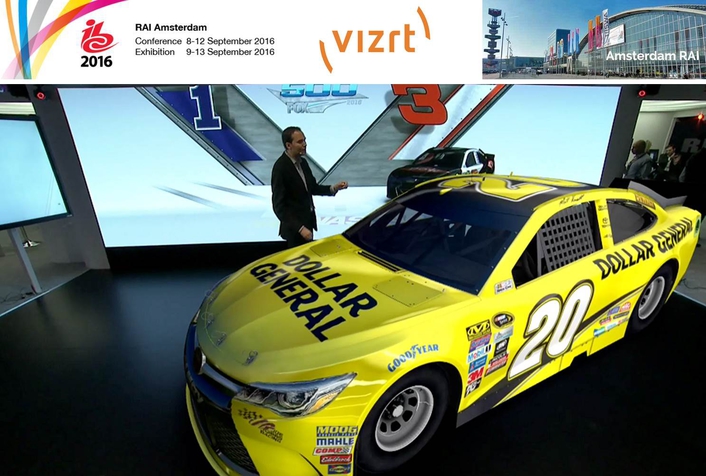 Get stories online faster than ever before
Vizrt’s brand new tool, Viz Story, will be shown for the first time at IBC 2016. The tool enables journalists to create stories for online and social media. Users can edit video as content is being ingested, add state-of-the-art 3D graphics and branded maps to video timelines, and publish directly to Facebook or other online and social media targets; all from the same easy-to-use web interface. Vizrt will also show how journalists and editors can easily add text on video graphics and narration to videos. Viz Story will be available with low start-up costs as a subscription.

One-box live production and playout
Viz Opus, Vizrt’s compact control room solution, provides newscast automation, real-time graphics and video playout, including playout of commercials, all in a single cost-effective system. At IBC it will show how to easily set up an IP-based live talkshow, podcast, and other smaller productions with minimal space for a “one-man-show” production and playout.

Vizrt’s video server: At the forefront of the IP development
At the show, Vizrt will show a complete IP production and playout solution with the latest version of the powerful video server and real-time media compositor, Viz Engine. Vizrt’s solution helps broadcasters meet the challenges of the SDI to IP transition and for operating effectively in both hybrid SDI/IP and IP-only environments. Viz Engine is a central part of any IP ecosystem with clip players, downstream keyers and DVEs.

Vizrt is a member of the the AIMS alliance and part of the ASPEN community. Vizrt is also a selected member of the VRT-EBU LiveIP project for live IP graphics, working in close collaboration with other industry leaders in IP development and innovations. The project is nominated as a finalist for the IBC Innovation Award for Content Creation.

A new html plugin for newsroom editing
The latest developments in html-based newsroom workflows will also be demonstrated at IBC 2016. A new html-based newsroom plug-in enables journalists to populate graphics and video templates in their browser of choice, on Mac or PC. Compatible with the industry leading tool Viz Pilot, the new plugin can run on the same backend or on a completely new configuration. It runs natively in the Octopus Newsroom System and ENPS.

Studio videowall control
Viz Multiplay will also be presented at the show as a multiscreen and video wall control system. Vizrt will show how media companies use the system for displaying election results with multiple video sources, clips and data-driven graphics – all controlled from an easy-to-use touch-screen interface running in a browser.

Easy social media and weather data integration and visualization
As part of the Social TV solution, the latest version of Feed Streamer will be shown for easy moderation and publishing of social media content including Tweets, Facebook posts, Vines, and Instagram images and video. Feed Streamer now also supports  weather point data, allowing media companies to visualize weather content, such as a 5-day forecast or city forecasts over 3D branded maps, without the need of an in-house meteorologist. Also demonstrated at the show will be its integration with Signal – a tool used with Facebook and Instagram that lets journalists source, gather and embed newsworthy content directly into broadcast programming.

Sports production in the stadium and on-air
Vizrt will display the sports production tools behind the year’s biggest events including the Summer Games in Brazil and the European Football Tournament. We will show a complete end-to-end workflow for rapidly displaying match highlights and analysis clips. Also new at IBC 2016, is the player-attached tracked graphics which work with the new automatic player tracking feature in Viz Arena. This allows player moves to be highlighted easily and rapidly on instant replays.

Augmented reality and interactive graphics
Vizrt will be running its most engaging live studio augmented reality show yet. With even more engaging AR, interactive graphics and a more impressive technical setup for an automated live show than at NAB earlier this year, it will also demonstrate, how to add AR content to any live production without the need of a chromakey wall

Vizrt will be hosting its IBC 2016 press conference on Friday 9 September from 2-3pm at Vizrt’s stand 7.A20.