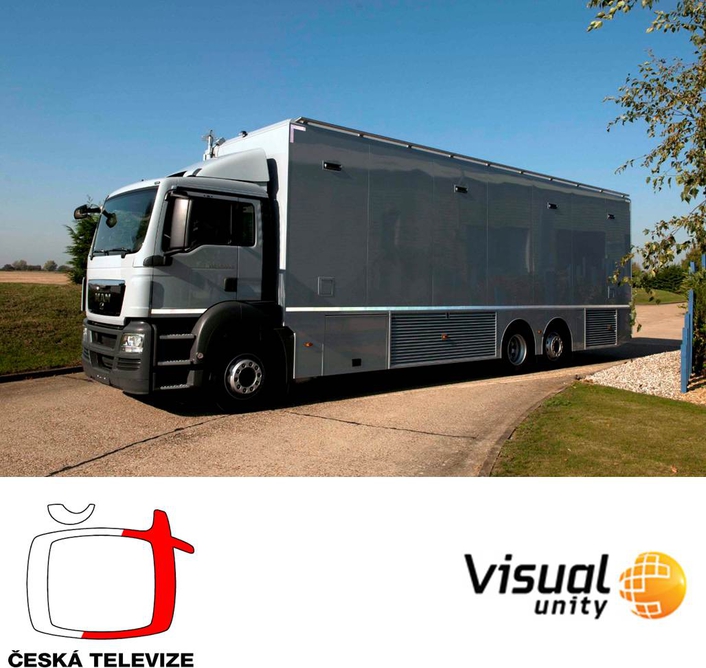 Czech TV took delivery of its new OB truck in October and has already put it through its paces
Systems integrator and multiscreen platform provider Visual Unity has enabled Czech TV to enhance its production capabilities by delivering the broadcaster’s fully High Definition-equipped Outside Broadcast vehicle.

Designed to capture mainly sporting and cultural events, the new vehicle is based on a 26 ton MAN chassis with a single expanding side. At 12 meters long and nearly four meters high, it is the second completely HD equipped vehicle in Czech TV’s fleet and provides the entire technical infrastructure needed to deliver Outside Broadcast content in full HD.

Visual Unity was commissioned to handle this prestigious project on the basis of its extensive experience of designing, delivering and integrating turnkey TV systems, broadcast-IT convergent and multiscreen solutions. Borne out of respected international SI Visual Connection (latterly KIT digital Czech), Visual Unity offers an in depth understanding of the complexities of the broadcast chain coupled with extensive in-house software expertise.

Jakub Kabourek, CEO of Visual Unity, says: “As the Czech Republic’s state broadcaster, Czech TV is committed to delivering a premium viewing experience for its audience and constantly strives to deploy the latest technology to optimize its operations. This philosophy was the driving force behind its decision to invest in a new vehicle that could deliver High Definition content from major outside broadcast events.”

Visual Unity’s brief was to ensure that the new vehicle was compatible with Czech TV’s existing systems and interfaces, while also providing the high standard and effective design needed to tackle demanding video and audio productions. As one of the region’s most respected and successful broadcasters, Visual Unity was conscious of the importance Czech TV placed on this project and was fully committed to delivering a state-of-the-art solution that fulfilled all of the design criteria.

Jiri Jires, Head of Czech TV’s Outside Broadcast department, says: “Our main aim was to build a truck that could easily be used for the daily production of material from smaller sports venues and theatres, and from places within cities where we can’t use larger trailers. We intend to gradually expand and upgrade our OB fleet and we believe that our next truck will follow the design of this latest vehicle. I was very impressed with the way in which Visual Unity incorporated all our special requirements into this project.” 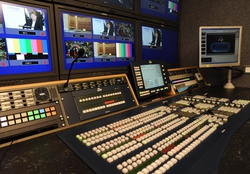 Under the direction of project leader Tomas Vesely, the new vehicle was coachbuilt in the UK by Spectra Engineering and engineered together with Megahertz. Once this part of the project was completed, the truck was driven to Visual Unity so that the engineering team could finish the custom installation. In total the project took just 10 months to complete.

Tomas Vesely says: “The most demanding stage of the project was the initial layout design, which we worked on very closely with the customer. We needed to install a lot of equipment, while at the same time provide an efficient, ergonomic operational space for the crew, including a comfortable 5.1 surround sound suite for audio mixing. Achieving this required some thought, given the fixed size of the 12 meter chassis. Another issue we had to resolve was incorporating several different heating systems, which are needed because Czech TV plans to use the truck extensively for winter sports events. The final systems integration challenge was integrating LSB’s VSM control system, which is used to control the majority of the systems on board the truck.”

Czech TV took delivery of its new OB truck in October and has already put it through its paces. Its first successful live production was the Euro Floorball Tour 2011, which took place in Bmo, Czech Republic, at the beginning of November.

About Visual Unity
Visual Unity is an international Systems Integrator bridging the gap between broadcast and software-based media systems, to help clients reach and engage audiences – wherever they are. The team has been designing and delivering turnkey TV systems, broadcast-IT convergent and multiscreen solutions worldwide since 1991 – from HD Outside Broadcast vehicles and major playout facilities to automated Direct-to-Web platforms. Visual Unity’s award-nominated vuMediaTM platform helps broadcasters and content owners control how their brand and assets are managed and monetised in the multiscreen environment.  Through four highly scalable and flexible modules, the vuMediaTM platform delivers a cutting-edge web-based and mobile viewing experience, comprehensive VOD services and a secure robust Content Delivery Network – all of which can be seamlessly deployed into existing workflows.Visual Unity is based in Prague, London, Dubai and Belgrade.