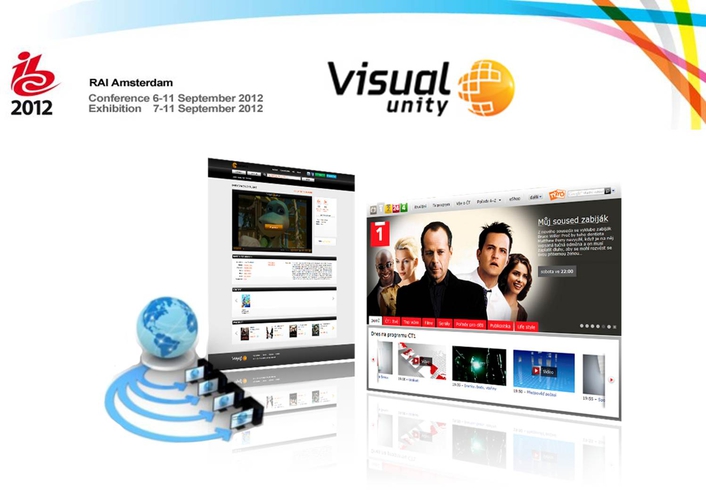 .
At IBC 2012 (Hall 3 Stand B60) Visual Unity, international broadcast and multiscreen systems integrator, will showcase its award-winning vuMedia™ multiscreen platform, which has enabled viewers across the world to enjoy this summer's sporting extravaganza on any screen.

New enhancements to the vuMedia™ framework will be on show, including an entry level, easy to use version of the online video platform, enhanced mobile features and support for 4K streaming.

Introduced at last year’s IBC and subsequently nominated for a number of awards, vuMedia™ is an integrated content management and delivery platform that allows broadcasters and content owners to control how their brand and assets are managed, delivered and monetized in the multiscreen environment. Highly scalable and flexible, vuMediaTM delivers a cutting-edge live viewing experience on the web or any mobile or connected device, comprehensive Video on Demand services, social network integration and secure robust content distribution – all of which can be deployed into existing workflows and business processes.

With vuMedia™ powering their multiscreen offering, broadcasters are maximizing their viewing figures by reaching new audiences across the full range of connected devices and increasing advertising bandwidth by 15-20%.

Tomas Petru, CEO of Visual Unity, says: “One program type that has particularly benefited from the power of vuMedia™ is sport - a genre where audiences are hungry for content that can be delivered directly to their mobiles, PCs and tablets. National broadcaster Czech TV, for example, which uses our vuMedia™ platform for its web-based iVysilani service, achieved a record of 80,000 online viewers during the Euro 2012 quarter final game between Portugal and the Czech Republic.

“While multiscreen technology is ideal for all sports, it is especially relevant for sports that don’t have big broadcasting contracts but still attract avid fans,” Petru says. “For example, we have successfully streamed the Czech Extraliga ice hockey for six years and, by using ‘new media’, have delivered a 93% saving over traditional television broadcast technology. In a very pragmatic, minimalistic one-camera set-up, we can cover a live sporting event for a little over $1000, while $2000 brings in multiple cameras, editing, graphics and so on and gets the game on the web and on mobile devices such as phones and tablets.”

Whether using the cloud or its own well-established Content Delivery Network, Visual Unity’s expertise in both linear and multiscreen systems integration is successfully helping companies worldwide to enhance their content offering and optimize performance as they build multiscreen technologies into their existing operations.

At IBC 2012, Visual Unity will also highlight its leading broadcast systems integration capabilities, which cover a wide variety of solutions from traditional Outside Broadcast vehicles and broadcast IT systems through to new media applications developed by Visual Unity’s in-house software development team.

About Visual Unity
Visual Unity is an international Systems Integrator bridging the gap between linear broadcast, IT and IPTV to help clients reach and engage audiences on any screen. Since 1991, the team has been designing and delivering turnkey broadcast and complex multiscreen solutions worldwide – from HD Outside Broadcast vehicles and major playout facilities to live internet streaming and Video on Demand services.