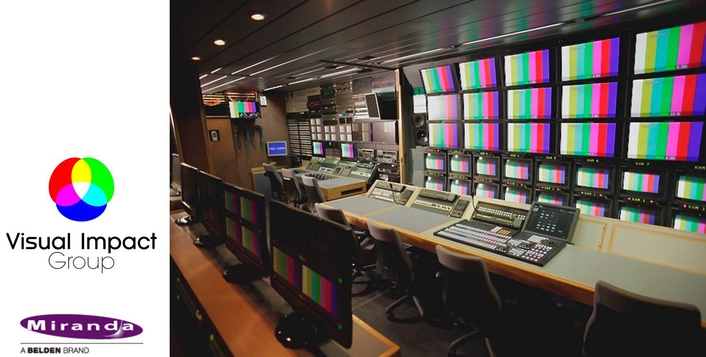 .
Miranda Technologies, a Belden Brand, a global provider of integrated solutions for production, playout and delivery systems for television broadcasters and multi-system operators, announces the installation of a range of Miranda solutions in the new Vi-1 HD production truck, designed, built and operated by Visual Impact Serbia. Vi-1 is Visual Impact’s first all-HD truck and the first privately-owned HD truck in the country.

Visual Impact has installed the NVISION 8144 Hybrid router, part of Miranda’s NVISION 8500 Enterprise Class router series, in the new Vi-1 along with the company’s NV920 router controller and three Densité 3 modular signal processing frames. Miranda’s ability to provide comprehensive integrated control of the entire infrastructure was a critical factor in the decision to choose Densité and NVISION.

The Miranda router is configured for 144 inputs and outputs, and is 3Gb/s ready for future operations. The 12m x 2.44m x 3.95m truck is wired for up to 14 camera channels, including 12 HD and two super slow-mo chains, all provided by Sony. The truck marks Visual Impact’s inaugural move into the provision of HD OB services throughout the region. In addition to the former Yugoslav region, Vi-1 will be deployed throughout The Balkans and Greece, primarily for sports, concerts and other live events.

“This is our first venture into outside broadcast facilities, and the first HD truck in the region,” said Visual Impact Serbia director Srđan Ršumović. “Our top requirements – apart from excellent quality, of course – were for reliability, and that the whole system should be simple and secure in operation. 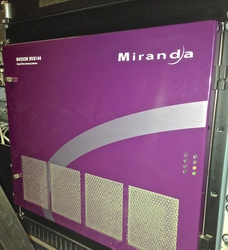 “We looked at a number of vendors for the core infrastructure, but Miranda stood out for its cost/performance ratio,” Ršumović added. “It also has an intuitive and powerful control system for the routing and signal processing, which greatly speeds set-up and improves operations. All the equipment is compact, too, and Miranda has an excellent reputation for reliability, so for us it makes it the ideal outside broadcast choice.”

Micky Edwards, Miranda’s vice president of sales in EMEA added, “This first full HD OB truck by Visual Impact Serbia is also a first for Miranda in the region. The selection of the NVISION 8144 is further validation of the reliability, performance and cost-effectiveness it delivers for OB and many other applications.”

For over 23 years, Miranda Technologies has been a leading worldwide provider of hardware and software solutions for the television broadcast, cable, satellite and IPTV industry. Its solutions span the full breadth of television operations, including production, playout and delivery. With a wealth of experience in delivering IT-based and traditional television systems, Miranda leverages its expertise to create the highest quality solutions available and delivers, deploys and supports them with a company-wide commitment to keeping the customer first. Miranda was acquired in July 2012 by St. Louis-based Belden Inc. and is the cornerstone of its broadcast division.