Vinten Radamec to Launch Next Generation Heads at NAB2012 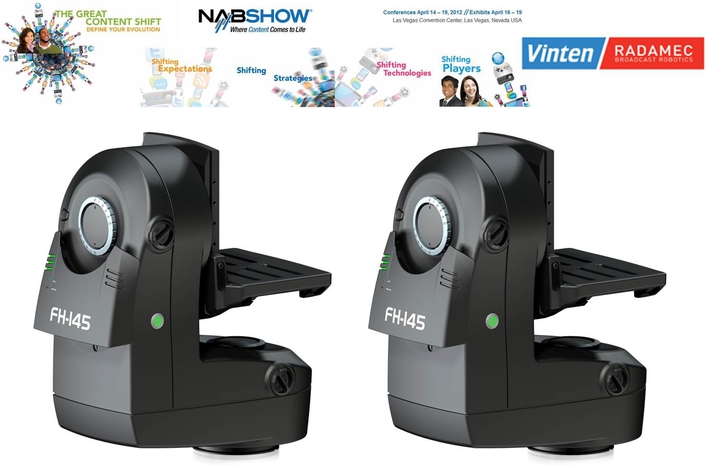 The FH-145 and FHR-145 pan and tilt heads will be shown alongside the recently released FHR-35 and will demonstrate Vinten Radamec’s latest technological advancements by incorporating the company’s new Intelligent Control Engineering (ICE) platform. This forward-thinking technology enables operators to achieve unprecedented control and accuracy in an innovative and highly compact form.

The FH-145 and FHR-145 next generation series of heads are built on the successful performance of Vinten Radamec’s FH-100 and FH-120 models. The addition of the company’s ICE technology will provide users with a simpler set-up and installation, as well as an improved pan and tilt resolution of over one million counts per 360 degrees, to give broadcasters the ultimate smooth image in both virtual and real worlds. The enhanced aesthetics include a new innovative tilt locking mechanism, improved drag and quieter changeover mechanism.

A virtual reality (VR) upgrade for the recently released FHR-35 will also be launched at NAB2012. It offers broadcasters the same exacting performance and enables the head to be used in a broad range of VR applications, from sports to studios. The FHR-35 pan and tilt head was Vinten Radamec’s first product to incorporate the ICE platform and in addition to the performance benefits of the ICE technology, it allows for straightforward and simple VR integration.

Vinten Radamec will unveil more details about the performance benefits of ICE at NAB2012. A full range of ICE based products are expected to be released during the next 18 months.

Karen Walker, commercial manager, Vinten Radamec, says: “NAB2012 is a highly significant event for Vinten Radamec. Our extensive range of products have been designed and developed around innovation and customer commitment and these new pan and tilt heads are the perfect example of that.”

“This next generation of robotics demonstrates how we are moving forward with our products and also how we’re listening and responding positively to customer feedback. Many of the enhancements gained from the ICE technology actually reflect the comments we have had from our customers. We’re really looking forward to demonstrating to NAB2012 visitors all the unique benefits and performance of this technology.”

The extensive range of Vinten Radamec robotic camera support solutions can be seen on stand C6425 at the NAB2012 exhibition.