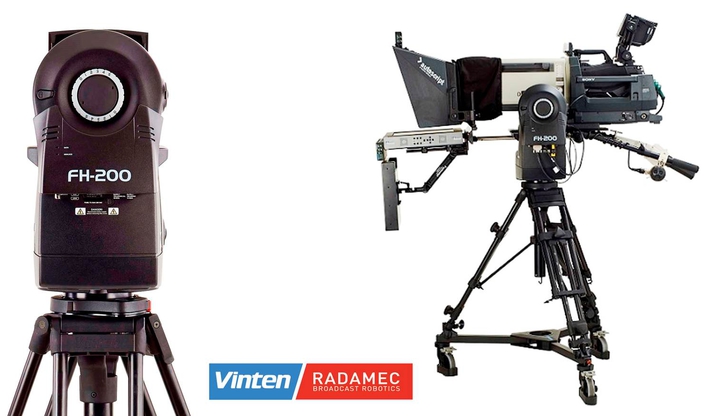 Next Generation Robotic Head for the Heaviest Payloads
Vinten Radamec®, a Vitec Group Company, introduces the latest addition to its range of next generation fluid heads, the FH-200. Based on the design of the company’s recently released FH-145, the new FH-200 provides the same exceptional performance with an increased capacity, capable of handling payloads up to 90kgs/200lbs.

The FH-200 provides a robotics solution for the larger studio cameras or build-up kits with box lenses, talent monitors and large viewfinders. The new head incorporates all of the functionality of the FH-145 that broadcasters value, with additional features to make it suitable for the heavier payloads that are common in numerous studios across the globe.

Karen Walker, robotics commercial manager for Vinten Radamec said: “We are delighted with the success of the FH-145 which has become the robotic head of choice for many studios around the world. The FH-200 was designed as a direct result of customer feedback, who indicated they wanted the same high quality robotic performance for their heavier studio set ups.

“We have kept the familiarity of the FH-145, taking its outstanding on-air movement quality and accurate shot replay, and transferred them into this new fluid head that can handle even larger camera and lens packages.”

Additional features of the FH-200 include a new mounting cradle that is now large enough to suit the wider studio cameras. Like the FH-145, the FH-200 can also be used in both manual and robotic modes.

Walker continued: “We have created a different pan bar mounting arrangement on the FH-200 as the big box lenses require larger pan bar mounted zoom and focus demands. This new head includes pan bars from the renowned Vinten Vector range of manual heads. The updated motion control parameters of the head ensure smoother movement and more accurate recall of shots even with those much heavier payloads.”

About Vinten Radamec
Vinten Radamec is a leading provider of robotic camera support systems offering engineering excellence and globally supported solutions for a wide range of technologies and markets. Its extensive range of products includes robotic heads, pedestals and controllers suitable for studio, OB and legislative environments.  Recognised for some of the most innovative broadcast robotics in the world, Vinten Radamec has a worldwide customer support network and distribution infrastructure, and an industry leading research and development programme.
Vinten Radamec solutions take a seamless role in the broader automated environment and thereby increase the flexibility of systems to take advantage of the economic and operational benefits of robotic cameras.