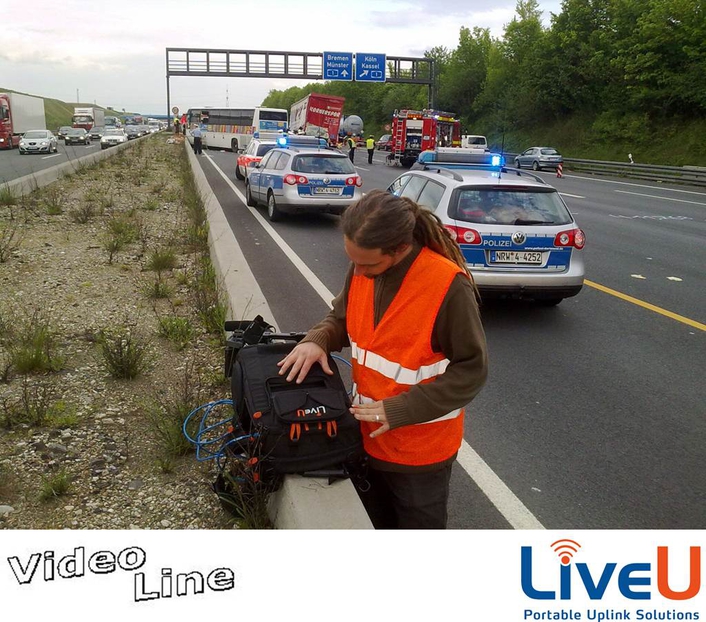 The service and equipment has been provided by LiveU’s German distributor Netorium GmbH
LiveU, a pioneer of portable video-over-cellular solutions, has announced that German news agency Video-Line is successfully deploying its LU60 cellular uplinking technology across its extensive newsgathering operation.

Video-Line is a news and lifestyle content provider based in the Nordrhein-Westphalen region of Germany. It supplies footage to all the major German TV stations as well as newspapers and other online video platforms. After extensive research, Video-Line selected LiveU, highlighting three key reasons for its decision: the ability to get on-air quickly alongside extremely good transmission quality with almost no interruption, even under difficult conditions; the easy-to-use mobile backpack unit with the associated server requiring no manual intervention; and LiveU’s strong customer support and long-term development of the technology.

Markus Wüllner, Video-Line TV, said, “The advantage of mobile transmission via LiveU is clearly the flexibility and speed. As a news provider, we have to be at the scene of an accident, murder, or major fire - tragic as they often are - as quickly as possible, without disturbing the emergency teams. For example, we were the first news agency to arrive at a terrible multi-car accident in thick fog at the end of last year. In less than two hours we were on air with the first pictures. Major TV stations and print media used the material in their coverage of the accident."

Wüllner continued, "We could only achieve this using LiveU’s technology. While a satellite truck has to be ordered in advance – a process that can take hours – we’re now able to transmit video to all the TV stations immediately. The unit can be easily set up on the way and be deployed the moment the camera team arrives. It’s a professional and reliable part of our newsgathering system.”

Wüllner also emphasised the fact that it’s effortless to connect the wide variety of cameras that its cameramen use to the LU60 units, either via SDI or Firewire.  “This technology is also interesting for smaller TV stations and production houses, companies that have not previously considered live content,” added Wüllner.

Video-Line uses the technology both for content that is then edited for later transmission and also for live transmission to multiple stations for major events.

Zion Eilam, LiveU’s Key Accounts Manager in Germany, said, “Our LU60 technology is ideal for news agencies for whom speed of deployment – alongside transmission quality – are vital in what is a highly competitive environment. The sophistication of our bonded modem technology combined with its cost-effectiveness has moved the acquisition of live content into a new era.”

The service and equipment has been provided by LiveU’s German distributor Netorium GmbH.

About Video-Line
Video-Line is a news and lifestyle content provider based in the Nordrhein-Westphalen region of Germany. It supplies footage to all the major German TV stations as well as newspapers and other online video platforms. Video-Line operates under the brand Videonews24.