Announcement of New £1.35m Truck and Flypack Deal
Video Europe’s newest outside broadcast vehicle – a 16-camera, double expanding truck built by C2S Systems, the broadcast integration arm of WTS Group – has carried out its first production at Chelsea FC’s Player of the Year awards in London.

And hot on the heels of the 26-tonne vehicle’s debut outing, the two companies have agreed a £1.35m project for C2S to build a further vehicle – an eight-camera OB truck – and a flypack, Video Europe’s second, as part of the film and broadcast equipment rental company’s ongoing expansion.

Having covered Chelsea’s end-of-season awards ceremony at their Stamford Bridge ground on Monday (12 May), the new 16-camera truck next heads to Monaco for Marcor International’s production of the World Music Awards on 27 May.

C2S engineers were working with Video Europe on both productions to offer technical support during the handover period – with six Sony HDC-2500 channels and one EVS XT3 being rigged for Chelsea, and 12 channels and two EVS for Monaco. 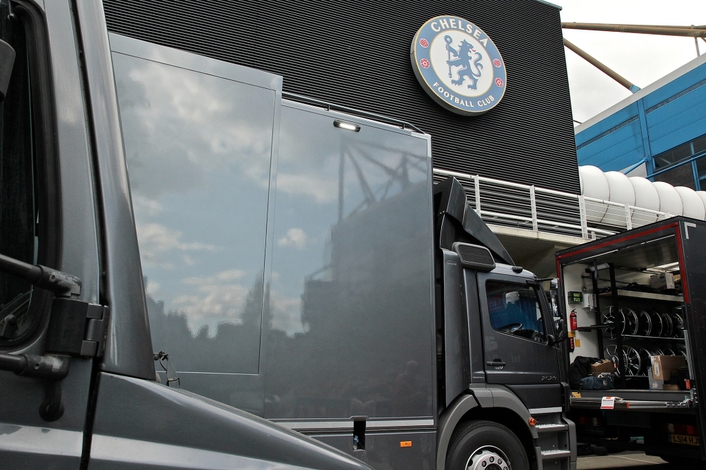 The truck on location at its first job, Chelsea FC’s Player of the Year awards

Steve Green, Managing Director of Video Europe, said that the truck was already paying dividends, having been built with the intention of helping clients to go after bigger jobs. “The new truck has enabled us to meet our clients’ needs and to win the jobs – before we didn’t have a big enough vehicle for these kinds of production,” he explained.

And revealing the new deal with C2S, he went on: “We are so pleased with what C2S have done with this truck that we are now ordering a new eight-camera vehicle, as well as another flypack.”

The flypack will help meet rising demand for Video Europe’s existing kit, built in late 2013. Both flypacks will be used at the Caribbean Premier League Twenty20 cricket tournament in July and August.

Speaking about the projects, Ben Murphy, Sales Director for WTS Group, said: “In building the 16-camera unit, we have delivered a market-leading, high-spec vehicle that we feel sure will meet the needs of the OB market. And we are delighted that Video Europe have chosen to commission these further projects, reflecting their confidence in our build quality and integration expertise.”

The new OB unit is due to be on the road in late 2014 and will be an HD truck capable of offering up to 10 camera channels, two EVS and six VTs. C2S will fit the vehicle with Sony production monitoring, a Sony MVS-3000 vision mixer, Evertz timing equipment and Miranda multi-viewer and distribution equipment. It will also have Snell video routing, Telex communications and Tektronix measurement equipment.

The flypack, meanwhile, will be capable of handling 24 camera channels, with two EVS also incorporated into the 11-rack HD system, which features a Grass Valley Karrera vision mixer, monitors by JVC, Marshall and NEC, and a Miranda NV-8000 series router.

The multi-viewer and distribution will also be provided by Miranda, with timing equipment by Trilogy and measurement from Harris. Audio and communications kit will include Sennheiser radio microphones and in-ear monitoring, a Yamaha M7CL audio mixer and Telex’s Adam M communications system with Omneo IP. All equipment will be supplied by C2S Systems.