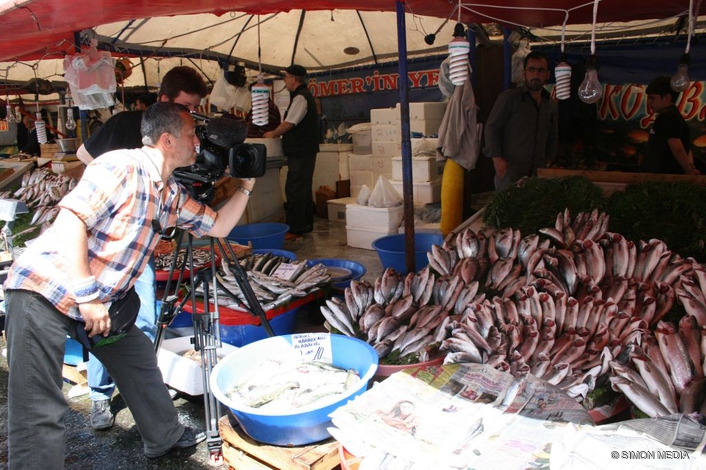 Wherever Patrick Simon reports the Video 18 fluid head is a dependable companion
Time is in short supply. A retake is usually impossible. For some, TV reporting and live production mean stress; for others, it is a challenge: "It is always exciting to arrive at the shooting location and realize that the shoot will not go according to plan. This means rethinking spontaneously, deciding quickly, getting the best possible results with the equipment at hand, and, in spite of everything, producing good material," says freelance digital media designer for video and audio Patrick Simon when describing filming in the ENG field. Every take has to be perfect the first time. Therefore, it is even more important for operators to be able to rely on camera support. His choice: the Video 18 ENG 2 CF, a tripod system by Sachtler, part of Vitec Videocom, a Vitec Group company.

Dependable and versatile in every situation…
"From wide angle to tele range, the Video 18 fluid head covers all camera set-ups in TV reporting," says Simon when describing his experiences. "The damping is a fantastic advantage with Sachtler: It always works extremely dependably. And this in temperatures ranging from -40° to +60° C (-40 to +140° F)." An additional monopod can add to versatility. "It is brilliant to have extreme flexibility at a press conference, for example, without straining your shoulder." The Sachtler two-fold extension carbon fiber monopod for shoulder cameras, optionally with a Betacam plate or the tried-and-tested Touch & Go plate is especially lightweight and allows for intuitive handling.

...everywhere...
"The West German Broadcasting Corporation (WDR) contracted us to do filming for Fazil Say – Heimatmusik in Istanbul. We were to visit the renowned pianist in his hometown, do interviews, and show the metropolis from his perspective. It was a challenge to visit all of the shooting locations within a week and to stay on schedule. Productions abroad are always very exciting – but also complicated. You can quickly end up in the main customs office and have to explain why the equipment must be brought into the country. You may not have much time for filming, so the equipment must work perfectly," explains Patrick Simon.

For Simon, the Video 18 fluid head by Sachtler is ideal because weighing in at 3.3 kilograms (7.2 lbs) it "has a comfortable weight but is still heavy enough to guarantee stability for larger set-ups. It is the perfect support for 90 percent of all projects we work on – including live productions," explains Simon. The Video 18 Plus has a 16-step counterbalance for extremely fine adjustments and seven horizontal and seven vertical grades of drag +0. The especially quick adjustment with the step-shifting system allows for maximum use in tight shooting schedules.

...and with every set-up!
The Video 18 by Sachtler can be used in a variety of different set-ups. To complement the Video 18 head, Simon chose the ENG 2 CF HD 28 and ENG 2 CF HD 20 tripods. These tripods with two-fold extension and the tried-and-tested Sachtler fast-action clamping system provide the necessary versatility for reporting. Despite their lightweight, the carbon-fiber tripods maintain extreme stability with high torsional stiffness. Simon's equipment for on-the-go live production includes four Sony HD camera production units based on PDW-350/PDW-700 XDCAM-HD units with self-developed camera cables, a Panasonic HS-400 / HS-450 live mixer as well as various Panasonic and JVC monitors. This allows many configuration possibilities: "Thanks to the payload range of two to 18 kilograms (4.4 to 40 lbs), a camera alone on the Video 18 can be just as softly adjusted as a heavy Sony PDW-700 with a mattebox and double battery," says Simon.

"Even in a fast-moving times in which filming is done in a new format every five years, a Sachtler tripod system is a relationship which will, at least, make it to the silver anniversary," concludes Simon. "When calculating the purchase price and the life expectancy in relation to days of filming, minimum tripod cost is the result. So it's a purchase for life."