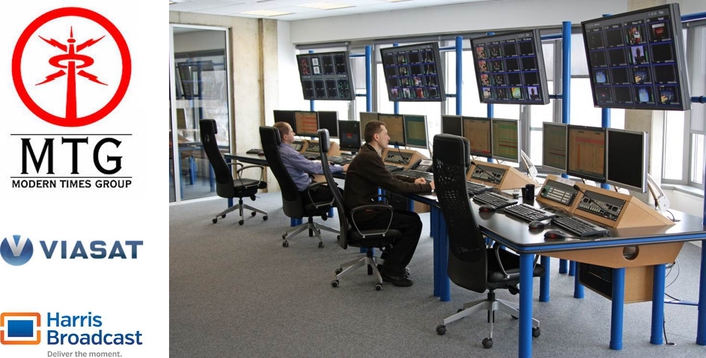 Capacity doubled without on-air disruption to Riga broadcast center
As part of a increase in the capabilities of its Riga broadcast center in Latvia, direct-to-home satellite and Pay TV operator Viasat, part of Modern Times Group, MTG, has installed a new 512x1024 Platinum™ IP3 router from Harris Broadcast.  The new router, supplied and installed by Latvian distributor Tilts Integration, expands the capabilities of Viasat’s existing Harris Broadcast Platinum router.  The Platinum IP3 will massively increase signal capacity as well as resilience through redundant crosspoints.  Together, the two routers will support more than 1500 outputs to accommodate future expansion.

“Our existing Harris Broadcast router has given us excellent service, and the new Platinum IP3 is the latest generation of the same reliable technology,” said Magnus Lindholm, Head of Platform Development at MTG.  “As well as continuity, it meant we could expand our facilities to more than double the capacity without taking the old router offline for a moment — in a facility as big as ours that is like replacing the engine in a car while driving at full speed along a freeway.”

Viasat has long benefitted from integrated routing capabilities in the Platinum router to maximize rack-space efficiency, using Harris Broadcast HView™ multiviewers to monitor traffic through the center.  The Platinum IP3 router increases multiviewer capacity, allowing Viasat to monitor new channels and facilities as they come online.  Viasat will control both routers from the same panels and computer screens, appearing as a single logical device to simplify operations.

“No one expects a router to just be a simple switch anymore,” said Mathias Eckert, vice president, sales and services, Europe & Africa for Harris Broadcast.  “Users count on them to handle multiple signal types and levels, and add functionality such as timing and clocking, format conversion and multiview monitoring.  The Platinum IP3 was developed in direct response to requests from users worldwide seeking highly reliable, futureproofed integrated routing capabilities.  We are delighted to see it adopted by businesses like Viasat, who can reap immediate operational benefits with the ability to scale based on changing needs.”

About MTG
Modern Times Group (MTG) is an international entertainment broadcasting group with operations that span four continents and include free-TV, pay-TV, radio and content production businesses. MTG’s Viasat Broadcasting operates free-TV and pay-TV channels, which are available on Viasat’s own satellite platforms and third party networks, and also distributes TV content over the internet. MTG is also the largest shareholder in CTC Media, which is Russia’s leading independent television broadcaster.

About Harris Broadcast
Harris Broadcast is an industry leader in delivering the most advanced, content-rich media experiences available for a wide spectrum of radio, television and private media networks around the globe. With more than 25 leading brands including Versio™, Selenio™ and Maxiva™, the company enables media organizations to tap into one of the broadest, integrated product and solution portfolios in the industry. Headquartered in Denver, Colorado, the company is widely recognized for its product quality and reliability, engineering excellence and customer service, and has earned nearly 100 technological firsts and more than 50 awards for technical innovation.

The Production Facilities...A Confederations Cup 2013
The Highlight of the Sporting Year 2013
Harris Broadcast and VTS ... for Bayerischer Rundfunk