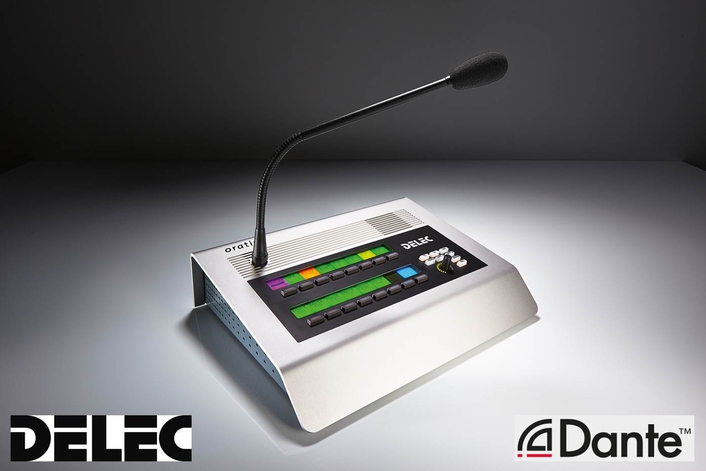 “Based on our oratis communication platform, we are systematically expanding our portfolio with products that are versatile, flexible and cost-effective. The implementation of audio-over-IP is the undisputed highlight of our new approach, allowing customers to leverage the potential of their existing IT infrastructure.”

Delec’s managing director, Norbert Schömel, is adamant that the products on display at prolight+sound will prove real problem solvers: This year’s highlights are the new Delec unito range, i.e. devices that convert audio signals from and into Dante™. Delec launched a whopping four unito units at prolight+sound.

Users of Dante™ networks already rejoiced at the announcement of the new subscriber panels with a Dante™ interface last fall. The first subscriber panels that can be connected directly to a Dante network without the need for an additional convertor, these units can easily be hooked up to a Delec CS1624 communication unit equipped with a Dante interface. Several subscriber panels are available: 19” units with 12 or 16 keys and a 16-key tabletop panel.

To boost the flexibility of an oratis system even further, it is now possible to connect oratis and oratis compact devices to Kenwood NEXEDGE® radio systems using the new oratis radio interface. Such a setup allows users to address up to 63 individual devices and supports 189 group calls from a portable radio. Best of all, point-to-point and group calls can be initiated from any Delec subscriber panel and any Kenwood portable radio.