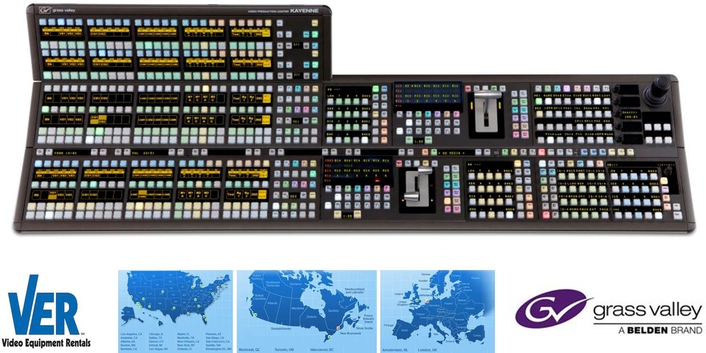 VER has served the broadcast and audio/visual markets for almost 30 years. The new Kayenne switchers complement the company’s extensive inventory of HD live production equipment, which includes several other Grass Valley switchers as well as Grass Valley cameras. Recently, the new Kayenne switchers were used to capture the action at Roland Garros stadium in Paris for the French Open 2014.

“We’ve been using Grass Valley’s switchers for many years and are continually impressed with their quality, reliability and easy learning curve,” commented Howie Rosenthal, director of broadcast services, VER. “The purchase of our new Kayenne switchers with K-Frame means we can continue to offer the best and widest selection of any rental house in the business, and remain at the forefront of the high-end rental market to give our customers even more creative options with their productions.”

The powerful Kayenne with K-Frame delivers unrivalled sophistication and features functionality enhancements that dramatically expand its capabilities, including 4K production—putting VER ahead of its competition and giving its customers the flexibility to create all types of live productions.  Kayenne with K-Frame is a 1080p-capable switcher that can adapt to offer up to 192 inputs, 96 outputs, up to 9 M/Es with six keyers in every full M/E and now supports 4K/UHD in addition to SD, HD and 3G formats. The Kayenne is field upgradable, giving VER’s customers the ability to add features as the need arises.

For use at the recent French Open, VER incorporated the versatile Kayenne systems into fly-packs, which were then installed into cabins for use by the broadcasters on site.

“Video switchers are the heart of broadcast production, especially live sports productions," commented Stephen Stubelt, vice president of sales, North America, Grass Valley. "The fact that VER entrusted Grass Valley’s Kayenne for coverage of the French Open is a testament to the creativity, dependability and reliability of the product."