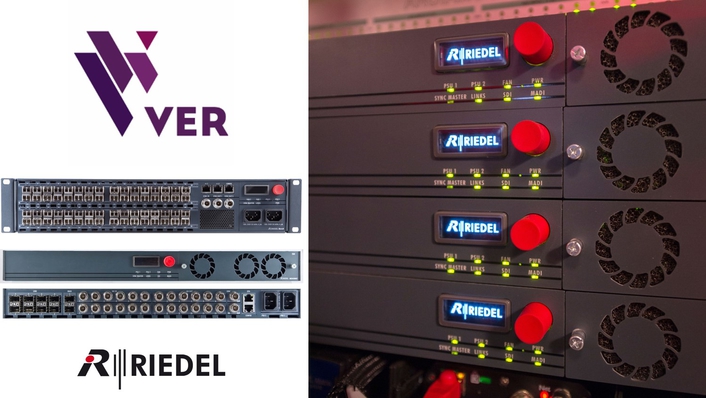 "Riedel's MediorNet family gives us the reliable performance and versatile signal routing and transport capabilities that are essential to the success of extraordinary projects and productions," said Jeff Werner, Director of Fiber Optics at VER.

With a 35-year history and offices around the world, VER supports more than 50 productions each day. The company is known for offering a great depth and breadth of rental equipment, as well as expertise in audio, video, lighting, LED, camera, rigging, media servers, fiber, and other aspects of production. Its services include multicamera production, broadcasting, creative screens control, enhanced environment, LED installation, and video system services.

The first implementation of the MediorNet system involved multiple sources and devices that required a flexible routing solution allowing the dynamic ability to insert a source anywhere in the chain and move it to any destination without requiring a direct path. The simplification of the audio and video paths was key to the success of the show. Using a system comprised of five small racks for capture or distribution gave VER the ability to manage audio, video, and data in a single environment and meant that they could instantly move and assign sources with the seamless precision and redundancy that is required for a live broadcast.

"The future for VER and the product is exciting," said Jason Newman, Business Development for Production Support Services at VER. "We have already identified it for use in major events, festivals, award shows, and broadcast environments."

"Our MediorNet family of modular products gives users such as VER the freedom to adapt smoothly to changing signal transport and distribution requirements," said Joyce Bente, President and CEO of Riedel North America. "Integrated signal processing, an intuitive interface for system configuration, and simple scaling are just a few of the characteristics that make these Riedel products a valuable addition to any production company or facility."