VENICE from DVS at European Football Championship, Tour de France and the Olympics 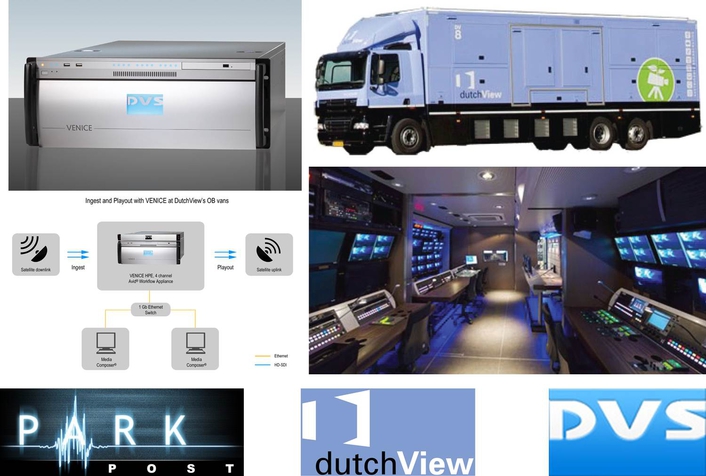 .
When reorganizing its workflows, the internationally renowned Dutch Broadcast IT service provider ParkPost has integrated two VENICE Media Production Hubs from DVS into the OB vans of its sister company DutchView. The ParkPost team now benefits from a lean IT infrastructure. The newly equipped OB vans were especially busy during summer: VENICE was responsible for the ingest of the recorded material at the 2012 UEFA European Football Championship, Tour de France and the Olympic Games that were covered at the RTL “De Zomer Van 4” (Summer of 4) daily sports live show.

This summer, three major sports events captivated a worldwide audience with their fast moving pictures: The European Football Championship in June, Tour de France in July and the Olympic Games in August. ParkPost, a Dutch provider for managed Broadcast IT services, integrated the Media Production Hub VENICE from Rohde & Schwarz DVS GmbH into the OB vans of its sister company DutchView, with whom they work closely together on many projects, to ensure fast and reliable ingest and playout of the recorded material. Thanks to its compact 4U chassis, VENICE requires only little space and offers room for up to 8.4 TB of fast and accessible internal storage thus eliminating the need for additional storage at the OB vans.

VENICE expands on video server features such as HD-SDI ingest and studio playout to include intelligent file-based functions such as file ingest, metadata editing, transforming, media transfer and distribution. In doing so, VENICE serves as the central Media Production Hub in the narrow and hectic environment of the OB vans, making it easier for users to handle the ever-increasing number of media clips and jobs. Thanks to the openness of its platform, VENICE integrates seamlessly into the OB van’s constantly growing IT architecture.

In the production environment of these three major sport events, literally every second is important. With the VENICE systems, ParkPost was equipped with a high level of stability and efficiency combined with considerable time savings, allowing for the most important seconds to be displayed to the audience.

At DutchView’s OB van, VENICE captures incoming live signals via HD-SDI. All streams are then stored on VENICE. Since VENICE offers direct collaboration with Avid Media Composer® thanks to the integrated Avid® Workflow Option, ParkPost’s editors can immediately access the entire material at all connected workstations. Thanks to the "edit while ingest" function in VENICE, video material can be viewed and edited even while it is being recorded, this way providing ParkPost with considerable time savings. VENICE does not just offer live video ingest over HD-SDI; it also allows files to be ingested from P2 or XDCAM storage media. Edited sequences can be directly transferred to VENICE and then be placed in the production chain. The subsequent playout of the edited material requires no additional equipment. Especially in the hectic and fast-paced sports production, these features prove to be highly effective since the workflow can be designed more smoothly, and content can be produced even quicker. A combination of the DVS Media Production Hub with the Spycer® content control software is especially helpful in fast media turnaround scenarios. VENICE’s codec variety (supporting, for example, Avid DNxHD®, Apple ProRes 422 or Panasonic AVC-Ultra) provides the users at ParkPost with maximum flexibility in the organization of their workflows. The versatile setup allows them to organize their workflows without reconstructing them permanently and enables them to easily adapt to the changing needs of their customers.

Gerbrand De Ridder, Manager R&D and Projects Department at ParkPost: “In our fast-paced news production environment every second counts and there is just no room for errors. The VENICE Media Production Hub not only brings considerable time savings, it also offers stability and efficiency. Moreover, the compact chassis takes up only little space which is essential in an OB van environment."

Ernst-Joerg Oberhoessel, DVS Sales Manager Western Europe: "We are delighted that our client ParkPost can benefit from our lean OB van solution: VENICE provides more flexibility for faster workflows that need less systems as well as space while at the same time being very cost-effective. Our Media Production Hub takes file-based workflows to mobile production. It has been an honor to us that the DVS technology was such an essential part of the Football Championship, the Olympic Games and the Tour de France workflows.”

About ParkPost
ParkPost is part of Consolidated Media Industries, along with its sister companies DutchView, Infostrada Sports Group and NLBuzz. CMI is an innovative international group of service providers with a common focus on creating, managing, distributing and monetizing digital media. CMI assists with the realization of approximately 25% of all Dutch television productions per day and facilitates various game platforms and enterprise B2B solutions. This makes CMI the largest integrated digital media service provider in the Netherlands. The group currently employs over 850 staff and has an annual turnover of more than €120 million. Each of the companies within CMI is a proven leader within its own market segment and makes use of the common technical and operational back office. ParkPost is located in the Media centre, right next to the large parking at the main entrance of the Mediapark.

About Rohde & Schwarz DVS GmbH
For more than 25 years, Rohde & Schwarz DVS GmbH has been very successful in the professional film, video post production and broadcast markets. The specially developed and manufactured hardware and software are applied to the production of popular TV series, Hollywood blockbusters and in Digital Cinema. CLIPSTER® was the first system in the world to make real-time 4K processing possible. The future-proof Media Production Hub VENICE offers a flexible solution for modern, file-based workflows in broadcast environments.